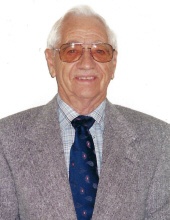 Marion J. Groot, age 97, of Springfield, Missouri formerly of Sheldon, Iowa who passed away on Friday, July 16, 2021 at his daughter’s home in Springfield, Missouri. His Memorial Services will be held at 11:00 A.M. on Saturday, July 31, 2021 at the Parkview Assembly of God Church in Sheldon, Iowa with Rev. Ray Corlew and Rev. Ken Snyder ~ officiating.

In lieu of flowers, the family is requesting memorials be given for The Fire Bible,
a Pentecostal Study Bible translated into 60 languages. bit.ly/GrootBibles

In Memory of
Marion John Groot

After the today’s service, relatives and friends are invited to
join the family for lunch in the fellowship hall of the church.

In lieu of flowers, the family is requesting memorials be given for The Fire Bible, a Study Bible translated into 60 languages. bit.ly/GrootBibles

Marion John Groot, son of John and Maria (DenBeste) Groot, was born October 2, 1923, in Sanborn, Iowa. At age 11 months the family moved to the family farm on the north side of Sheldon. Marion lived in Sheldon for 92 years until moving to Springfield, Missouri to live with his daughter and son-in-law in 2016. Marion passed away at his daughter’s home on July 16, 2021, following Covid, reaching the age of 97 years, 9 months, and 14 days.
By age 14 Marion was running the family dairy farm. He hired grown men for 10 cents an hour as long as they produced 11 cents worth of work. He and his father provided garden spaces and free milk for the children. Upon taking Laura King home from church in early 1944, he said he was tired of being alone—would she be his wife? They were married on May 24, 1944, in Storm Lake.
Following their marriage, Marion and Laura lived on the Groot family farm on highway 18 for the next 11 years. Many changes, improvements, and expansions were made to the farm. Daughter Trudy Ann was born November 22, 1948. Marion was the happiest father, even building a shaded child’s seat on his tractor so Trudy could go do field work with him. When a group fielded the idea for Sheldon Memorial Hospital, John and Marion were up for donating land since Laura and Trudy had suffered life-threatening results from the poorly-equipped Good Samaritan Hospital. The small Groot farm gave up land for a ‘real’ hospital.
Marion was the growing entrepreneur in multiple ways. In 1954 they built their dream: Hiway Dairy, just down the hill to the east. They now processed their own milk, plus had soft-serve ice cream complete with car hops in the front of the building during the summer months. As soon as the business was successful, Marion gave the farm over to his brother Henry to do the farming. Marion and Laura owned a business, a house, and land themselves. The sky was the limit!
The good news was that the dairy only took his mornings—especially after Iowa closed every individual dairy. Hiway Dairy became the first “jobber” for Wells Blue Bunny and was the only dairy in Sheldon to supply milk for the schools, grocery stores, and door-to-door delivery. Marion took a correspondence course in how to repair home appliances. Groot Repair was the new afternoon business. That took him into nearly every home in a widening circle around Sheldon as he mostly delivered and repaired Sears appliances.
Marion was a “forever” member of Parkview Assembly (formerly Sheldon Gospel Tabernacle) from its inception in 1935. By his mid-twenties he became a
deacon at the church, mentored by his greatly loved Fletch Huffman. Fletch taught Marion to be the best godly businessman, always honoring God in every aspect of his life. And that is how the community knew Marion for the next many decades. Marion always prioritized the church building, pastors, and people. The building was perfectly repaired for years. He loved being Sunday school secretary.
In 1966 during Trudy’s senior year, Marion announced that he was giving up the dairy. “Otherwise I would never get to come see you at college.” The next years were fruitful as Marion and Laura began traveling with a purpose to help at Teen Challenge centers, Boys’ ranches, churches, and 24 years of wintering at Roma, Texas to help with Bethel Mission near the border, and 7 years at Kerrville, Texas to help at a camp and with Salvation Army. In Sheldon he changed to building large commercial buildings—including the town’s first modern medical clinic. He later developed the area north of the farmstead with dozens of single-family homes. This led to him building multi-plex homes and condos.
From early marriage Marion and Laura owned RVs and traveled extensively throughout the United States—including 3 times to Alaska—and Canada and Mexico. Their daughter Trudy and husband Ken were missionaries for 39 years, and Marion and Laura were able to visit them and their grand-daughters in Brussels, Belgium in 1979 and in Tanzania, East Africa in 1984.
Marion was an exemplary husband, father, and grandpa. He took amazing care of Laura through her many health issues, all the way to her death from cancer in 2009. He loved to spend as much time as possible with Trudy from her birth to his death in her home. And granddaughters Heidi and Heather were a special delight, as were the 10 great-grandkids who graced his life the past 23 years.
Marion leaves to cherish his memory his daughter Trudy & husband Ken of Springfield, MO; two granddaughters and husbands: Heidi & Jeff Gilboy of Aurora, CO, and Heather & Sean McGee of Georgetown, TX; and 10 great-grandchildren: Malaika & husband Samid Penn of Wheaton, IL, Abigail Gilboy of St. Paul, MN, Laura, Aiden, Ivy, Karis, Arielle, & Owen Gilboy of Aurora, CO, and Kian & Bryn McGee of Georgetown, TX; sister-in-law Jean King of Sioux City, IA; nieces, nephews, and friends.
Marion was preceded in death by his parents, wife Laura, in-laws Fletcher and Cecile King, sisters Dorothy Vanderburg and Katherine Mouw, brother Henry Groot, 9 brothers-in-law, and 5 sisters-in law.

IN LOVING MEMORY OF
MARION GROOT
October 2, 1923 — July 16, 2021
To order memorial trees or send flowers to the family in memory of Marion J Groot, please visit our flower store.