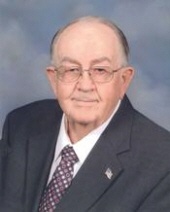 Visitation with the family present will be after the Memorial Service on Thursday at the church.

Memorials may be directed to the
Oakdale Evangelical Free Church
rural Meriden, Iowa.

Arrangements under the care of the
Eldridge Family Funeral Home; Paullina, Iowa
MARVIN E. ULVEN
Marvin Edwin Ulven, the son of Harold and Mary (Hanson) Ulven was born August 24, 1926 in Soldier, Iowa. He was raised on a farm near Soldier, where he attended school and graduated from high school. He went on to further his education at Iowa State University. On June 7, 1953, he was united in marriage to Bonnie Mae Stark at the Oakdale Evangelical Free Church in rural Meriden. After their marriage the couple settled on a farm in the Paullina area. Marvin was inducted into the Army and served from February of 1955 to February of 1957. The couple farmed the family farm and Marvin raised Hereford cattle and had the grand champion Hereford bull at the Iowa State Fair. He retired in 1989 and the couple moved into Paullina. The couple’s retirement years were spent in Paullina. His wife preceded her in death on March 13, 2002 in Primghar, Iowa. Marvin remained in Paullina until moving to the Sunrise Hill Care Center. He passed away on Monday, November 26, 2012 at the Covenant Medical Center in Waterloo, Iowa reaching the age of 86 years, 3 months and 2 days.
He was a member of the Oakdale Evangelical Free Church in rural Meriden and over the years was a strong supporter of South O’Brien sports teams. He was often seen at many of their events. He enjoyed the Iowa Hawkeyes, Minnesota Vikings and having coffee with his friends.
Marvin leaves to cherish his memory, two sons, Mark and his wife, Debra Ulven of Pittsburgh, Pennsylvania and Dr. Matthew and his wife, Julie Ulven of Hudson, Iowa; one daughter, Sara and her husband, Mark Salansky of Parker, Colorado; six grandchildren Stephen and Sean Salansky, Alexandra, Allison and Nicholas Ulven and Mieke Ulven; one brother, Orvan Ulven of Soldier, Iowa; a sister-in-law, Betty Stark Olson of Atlantic, Iowa, and many other relatives and friends.
He was preceded in death by his wife, an infant daughter, Karen; his parents, two sisters, Lois Whitney and Shirley Aronson.
To order memorial trees or send flowers to the family in memory of Marvin E. Ulven, please visit our flower store.