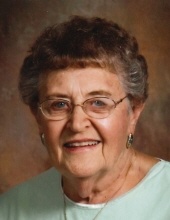 Visitation
with family present will be
from 3 - 5 P.M. on Sunday, July 7, 2019
at Vander Ploeg Funeral Home in Sheldon.

MUSIC
“My God and I”
“If You Could See Me Now”
Sung by: Marilyn Maurer
Accompanist: Mary Jo Huls
CONGREGATIONAL HYMNS
“How Great Thou Art”
“Amazing Grace”
Organist: Ingetta Tutje

Mary Helene Rozeboom, the daughter of Jacob and Maria (Bruyn) Kraai was born on January 4, 1927 near Sheldon. She attended country school in Lynn Township in Sioux County, Iowa. She married Marion Rozeboom on March 16, 1946 in Junction City, Kansas while Marion was in the Army at Fort Riley, Kansas during World War II. They lived there for one year. After returning home from the service they farmed near Cleghorn, Boyden, Melvin, Primghar and Sheldon areas. She was also employed part time at the Sheldon Livestock Sale Barn Lunch Café and with L’Trio Catering. After retirement they traveled and spent many winters in Phoenix, Arizona. Marion passed away on September 18, 1991. After two years living in the country she moved to Sheldon on May 13, 1993. She moved to Fieldcrest on July 21, 2012. On Wednesday, July 3, 2019 Mary Helene passed away at Sheldon Senior Care reaching the age of 92 years, 5 months and 29 days.
Mary Helene was a charter member of Bethel Reformed Church and made her confession of faith and was baptized on April 20, 1947. She loved to play cards with family and friends.
Left to cherish her memory is her sisters-in-law, Winona Kraai of Sheldon, Carina Rozeboom of Sheldon, Evelyn Nieuwenhuis of Wheatridge, Colorado; brother-in-law, Donald and his wife, Phyllis Rozeboom of Loveland, Colorado as well as several nieces and nephews.
Mary Helene was preceded in death by her husband, Marion Rozeboom, parents, Jacob and Maria; sisters, Johanna and Peter Kroese, Hermina and Henry Boerhave; brother, Adrian Kraai; brother-in-law, Allan Rozeboom; two nieces, Marcia Rozeboom and Mary Jean Schemper.

I lift up my eyes to the mountains --
where does my help come from?
My help comes from the Lord,
the Maker of heaven and earth.

The Lord watches over you—
the Lord is your shade at your right
hand;
the sun will not harm you by day,
nor the moon by night.