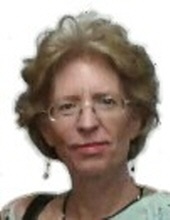 Mary Lou Wittrock
Primghar, Iowa
Memorial services for Mary Lou Wittrock, age 58 of Primghar, Iowa who passed away on Thursday, March 15, 2018 at the Dougherty House Hospice in Sioux Falls, South Dakota. Her Memorial Services will be 11:00 A.M. Saturday, April 7, 2018 at the United Church of Primghar, in Primghar, Iowa with Pastor Ken Carlson and Pastor Michael Hyde ~ officiating.
Visitation with the Family present will follow the service at the church, the Eldridge Family Funeral Home is assisting the Family with arrangements for Mary Lou.
MARY LOU WITTROCK, 58
Mary Lou Wittrock (Beaver) of Primghar, IA, passed away Thursday, March 15, 2018, in the Dougherty Hospice House of Sioux Falls, SD, after a brief but courageous battle with lung cancer. Mary Lou was born October 25, 1959, in Des Moines, Iowa and adopted by Dorothy and Earl "Jay" Beaver of Sac City, where she and her brother, Fred Beaver, were raised. After graduating from Sac City High in 1978, she studied keyboard at Simpson College, later returning to earn her Bachelor of Arts in Music Education and taught music at HMS-Hartley for two years. Mary Lou was united in marriage with Fred Wittrock on August 17, 1985, at the Little Brown Church, and the two resided in Primghar, Iowa for most of their 32-year-long marriage. Their family soon grew, with the addition of two children, and several biological siblings Mary Lou had found and reunited.
While parenting, Mary Lou also helped her husband with farming, painting and drywall, and their sign and vinyl graphics businesses as well. She was an organist and choir director at the United Church of Primghar for over twenty years, and regularly provided special music for services and events with the help of her family and other local musicians. She also donated her time assisting with youth music recitals, and most notably, the community praise band she founded, Joyful Noise. Whether arranging music, leading practice sessions, or accompanying and directing performances, Mary Lou exhibited passion and attention to detail in all of her musical endeavors. More recently, Mary Lou applied the same level of enthusiasm to mental health counseling, and after receiving her Masters of Social Work from University of Nebraska In Omaha in 2012, she worked in hospice and substance abuse counseling. Until the end, Mary Lou treasured the experiences she had while learning, working, supporting and teaching individuals—always hoping to contribute to her community, with her counseling and musicianship.
Mary Lou was preceded in death by her parents, Jay and Dorothy Beaver (Sac City), her brother, Fred Beaver (Des Moines), and her biological sister, Cindy Meylor (Milford).
She is survived by her husband, Fred Wittrock, and children, Adam and Faith Wittrock (all of Primghar) as well many siblings and in-laws; Shirley Beaver (Des Moines), Margie Pellersels-Beaver (Sac City), Mike Meylor (Milford), Tracy and Tom Jackson (Wichita, KS), John and Kathy Dollen (Maryland), and John and Sharon Gates (Des Moines).
To order memorial trees or send flowers to the family in memory of Mary Lou Wittrock, please visit our flower store.