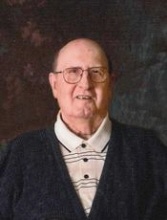 MUSIC
“It Is Well With My Soul”
“The King Is Coming”
Duet: Lori Heemstra & Dave Vander Broek
CONGREGATIONAL HYMNS
“Blessed Assurance”
“When The Roll Is Called Up Yonder”
Organist: Alyda Haack

Memorials may be directed to the:
Primghar Public Library and to the Kid’s Bible Club
at the American Reformed Church in Primghar

Mitch Vander Tuig was born on January 11, 1919 in Sheldon, Iowa, the oldest of five children. Mitch was raised on the farm and attended rural schools around the Paullina and Sanborn areas. A couple of Mitch’s fondest childhood memories were of riding horses and helping his dad with chores, although, he wasn’t crazy about milking the cows.
Mitch met Matilda Kreykes and the couple was married on October 9, 1941 in Matilda’s parent’s home. They lived all their 66 married years in Primghar.
Mitch started his professional career by having his own custom feed grinding and baling business and auctioneering on the side. He graduated from Reich Auctioneering School in Austin, Minnesota in 1937. Until 1944, he worked both jobs until he decided he wanted to be a full time auctioneer. He auctioned all over Northwest Iowa and Southwest Minnesota. In the beginning of his career he sold cattle, machinery and other farm related items. Later, he got his real estate license and was able to auction land. Mitch built up his business over the span of 50 years and retired in 1987.
For leisure he liked to play cards, golf and travel. Mitch also served on various boards including; the NW Iowa Board of Realtors, Handicap Village, Hope Haven and the Primghar Development Corporation. Mitch was also a Charter Baptized Member of the American Reformed Church where he served as Elder, Deacon of the Consistory and taught Sunday school and Catechism classes. Some of the traveling he did was to Butte, Montana to buy cattle, California to visit family and Arizona where he and Matilda spent 22 winters.