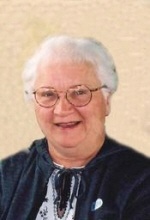 IN MEMORY OF
NADINE A. PARRY

Nadine Audrey Parry, the daughter of Nelson and Ada (Wacker) Henline was born January 16, 1930 in Primghar, Iowa. She was a Primghar Bulldog for all her education, graduating from Primghar High School in 1948. She was united in marriage to Dale Parry on August 23, 1950 in Primghar. The couple farmed north of Primghar for many years. She worked on the selective service for the Draft Board for fifteen years and worked for the Primghar Savings Bank for a number of years. She also worked for Nicholson and Edwards Grain Elevator in Gaza for many years. The couple moved into Primghar in 1989. She is preceded in death by her husband, Dale on July 16, 2009. After her husband’s death she moved to Hartley. She passed away at the Baum Harmon Mercy Hospital on Friday, December 7, 2012, reaching the age of 82 years, 10 months and 21 days.
She was an active member of the United Church of Primghar. She enjoyed painting, singing in the church choir, playing games, being with grandchildren, working at the Clay County Fair, volunteering with the bloodmobile, cappuccinos, ice cream and traveling.
Nadine’s memory will always be in the hearts of her daughters, Dee Vander Pol and Randy Guetschow and Kim and Joel Tewes all of Primghar and Jan and Jim Norton of Hartley; six grandchildren and eight great-grandchildren, Jason and Aimee Vander Pol and children, Maura and Ellie; Cory and Rose Vander Pol and children, Ashley and Courtney; Nick Tewes and his special friend Angie Shirk, Barry and Jackie Tewes and children, Tanner, Collin and Owen; Brock and Jenn Norton and daughter, Hadley; and Brooke Norton and fiancé Alex Maass. Nadine also considered Brian Guetschow as a grandson. She is also survived by a brother James Henline of Minnesota and sister Alpha Chapin of Sheldon, Iowa; also nieces, nephews and other relatives and friends.
She is preceded in death by her husband, parents and one brother, Perry.
To order memorial trees or send flowers to the family in memory of Nadine Audrey Parry, please visit our flower store.