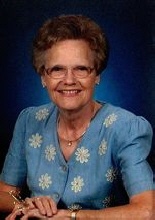 IN MEMORY OF
NEOMA Z. PUHRMANN

Arrangements under the care of Gaudian~Eldridge Funeral Home

After today’s service relatives and friends are invited to
Join the family in the fellowship hall of the church.
NEOMA Z. PUHRMANN

Neoma Z. Puhrmann, the daughter of John and Ersel (Roberts) Mohni, was born August 22, 1935 in Everly, Iowa. She received her education in country schools later graduating from Hartley High School in 1953. On September 12, 1953, she was united in marriage to Ralph Puhrmann in Hartley, Iowa. After their marriage the couple settled on a farm northwest of Paullina where they farmed for many years. After raising her family she began employment in Paullina at Shirk Pharmacy, now Barama Drug where she has worked for 25 years. She passed away on Monday, January 21, 2008 at the Mercy Medical Center in Sioux City, reaching the age of 72 years, 4 months and 29 days.
She was baptized and confirmed on Palm Sunday in 1950 and was currently a member of the Zion Lutheran Church in Paullina. She enjoyed bowling, playing cards, fishing and following her grandchildren’s many school activities.
Left to cherish her memory are her husband, Ralph of Paullina; three children, LaDonna Thooft of Russell, Minnesota; Leon and his wife, Jan Puhrmann of Paullina and Tami and her husband, Wayne Fiddelke of Paullina; also eight grandchildren, Nathan, Dustin, Aaron, Megan, Jordan, Clint, Andy and Bret; her mother, Ersel Mohni of Hartley; and other relatives and many friends.
She was preceded in death by her father, John Mohni; a son-in-law, Don Thooft and a brother, Irvin Mohni.
To order memorial trees or send flowers to the family in memory of Neoma Z. Puhrmann, please visit our flower store.