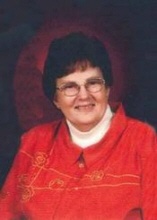 IN LOVING MEMORY OF
NORMA B. HATTERMANN

CONGREGATIONAL HYMNS
“How Great Thou Art”
“What a Friend We Have in Jesus”
“I’m But a Stranger Here”
Organist: Angela Johannsen

Norma Bertha Hattermann, the daughter of Raymond and Nora (Thiessen) Koch was born on November 11, 1934 in Gaza, Iowa. She was baptized on December 26, 1934 at Gaza Methodist. She graduated from Gaza High School in 1952 and then attended Mankato Community College. After college she worked at First National Bank in Primghar for four years. She was united in marriage to Edward Hattermann on September 2, 1956 in Paullina, Iowa. She became a member of Zion Lutheran Church on October 7, 1959. After their marriage the couple lived on a farm near Germantown. She worked as the Field Assessor for Caledonia Township for ten years. The couple moved to Paullina in 1984, where she was the trip coordinator for Reading Bus Lines for eighteen years. Norma passed away on Tuesday, March 12, 2013 at the Prairie View Nursing Home in Sanborn, reaching the age of 78 years, 4 months and 1 day.
She enjoyed going to casinos, bowling, playing cards and bingo. She also enjoyed going to Tyler’s baseball games and visiting with her family and many friends.
Norma is survived by her husband, Edward of 56 years; two sons, Todd and his wife, Deb Hattermann and Darin Hattermann all of Paullina; three grandchildren, Kayla of Paullina and Jessica and Tyler of Worthington, Minnesota; a brother, Wilbur and his wife, Lillian Koch of Ute, Iowa; a sister, Dorothy Thiessen of Hawthorne, California; sisters-in-law, Iris Hunnel of Paullina, Shirley Gries of Cherokee, Hazel Meyer of Spirit Lake and Hilda and her husband, Eldred Pauling of Bentonville, Arkansas; also other relatives, many nieces, nephews and friends.
Norma was preceded in death by her parents, two brothers, James and Robert Koch; a niece, Malinda Koch; three brothers-in-law, George Thiessen, Arthur Meyer and Bruene Hattermann Jr.; and a sister-in-law, Marlene Hattermann.
To order memorial trees or send flowers to the family in memory of Norma B. Hattermann, please visit our flower store.