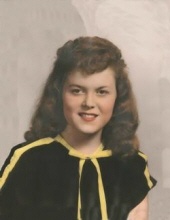 Norma J. Nelson
Honey Creek, Iowa
Funeral services for Norma J. Nelson, age 88 of Primghar, Iowa and formerly of Honey Creek, Iowa, who passed away on Sunday, October 19, 2014 at the Primghar Care Center in Primghar, Iowa. Her services will be at 11:00 A.M. on Thursday, October 23, 2014 at the Missouri Valley Church of Christ in Missouri Valley, Iowa with Pastor Kim Nelson officiating.
Burial will be in the Branson Cemetery in Honey Creek, Iowa.
Visitation will be from 10:00 A.M. until time of the service at the church on Thursday, October 23, 2014.
Arrangements are under the care of the
Eldridge Family Funeral Home of Primghar, Iowa
On line condolences can be sent to eldridgefamilyfuneralhomes.com

Norma J. Nelson
Norma Jean Nelson, the daughter of Preston A. and Myrtle (Christensen) Niles, was born August 10, 1926. She grew up near Logan at Valley View Orchard where she attended country school and graduated from Missouri Valley High School in 1943 at the age of 16. She taught country school for a year, then worked at Union Pacific in Omaha for a year or two before attending Iowa State University in Ames for a couple of years. She then returned to Logan where she worked in the treasurers office at the county courthouse. On September 5, 1954, Norma was united in marriage to Richard S. Nelson in Missouri Valley where they lived for a short while before moving to the Nelson family farm in Honey Creek where they lived and worked until Richards death in 1996. Norma then moved to Primghar where she passed away on Sunday, October 19, 2014 at the Primghar Care Center reaching the age of 88 years 2 months and 9 days.
Norma was a wonderful farm wife and mother who always raised a large garden for canning and freezing and did lots of baking and cooking. She was a very talented seamstress who also enjoyed reading and crafting and spending time with family. Norma grew up as a member of the Baptist Church in Missouri Valley and was later a dedicated member of the Missouri Valley Church of Christ and the Primghar Church of Christ.
Remembering Norma with love are her three children: Kim (and Bonny) Nelson of Honey Creek; Kay (and Dave) Hicks of Primghar; Kirk Nelson of Sheldon; seven grandchildren; Beau Nelson, Kameron (and Dustin) Koyle, Kara Nelson, Turner (and Staci) Hicks, Kiley Hicks, Keagan (and Hannah) Hicks, and Wyatt Hicks; four great grandchildren Bailey, Devon, Tylee and Flynn, sister and brother-in-law Margaret and Robert Hardy of Missouri Valley, Iowa; many nieces, nephews other relatives and friends.
She was preceded in death by her husband Richard, parents, sister and brother-in-law Joyce and Duane Hubbard.
To order memorial trees or send flowers to the family in memory of Norma J. Nelson, please visit our flower store.