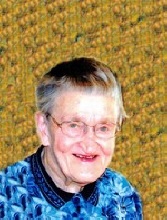 IN MEMORY OF
OLIVE FERN WILSON

Visitation with the family present will be from 6 to 8 P.M. Friday, March 5, 2010 at the Gaudian-Eldridge Funeral Home in Primghar.

After today’s service, relatives and friends are invited to join the family in the Community Building at Mapleside.

Arrangements under the care of the
Gaudian-Eldridge Funeral Home
Primghar, Iowa
Olive Fern Tjossem Wilson was born May 19, 1922 to Orren and Florence (Crosbie) Tjossem. She grew up on farms in Paullina and Gaza graduating from Dale #7 country school and then attended high school in Paullina. She graduated from Gaza in 1940, as the Valedictorian. Olive attended Wayne State Teacher’s College in Wayne, NE and received her two year degree. She taught in middle schools in Oto and later Spencer. On June 21, 1947, she married Dean Warren Wilson at Paullina Friends Meeting near Paullina. Olive and Warren farmed near Churdan, Sutherland and Primghar. They had three children; Doyle, Neva, and Lowell. Olive taught in the Primghar School System from 1964-1971, where her former students remember her hands-on approach to education.
Olive and Warren had many good years during retirement. Gardening, visiting, entertaining, playing with grandchildren, quilting, and traveling were some of their activities. Olive was an advocate of peace and justice and lived her beliefs all of her life. Choosing to work for peace instead of supporting conflict was important to Olive. She served as Presiding Clerk from Friends Committee on National Legislation from 1989-1991 and gave the annual speech at the national session both years. Olive was active in many local organizations and volunteered at the South O’Brien School, Hospice, NW Iowa Peace Links, Primghar Women’s Club and Primghar Community Building Board. After dealing with Non-Hodgkins Lymphoma for five years, she moved to Primghar Rehabilitation and Care Center in September of 2009, where local physicians and the staff took very good care of her.
Olive is survived by three children and their spouses, Doyle and Sheryl Wilson of Primghar; Neva and Grant Kaufmann of Bolivia; Lowell and Eunice Wilson of Primghar; eight grandchildren and their spouses and eight great-grandchildren; Shana Wilson and Mark Babas of Broomfield, CO; Justin, Rachel, Elodie and Amelie Wilson of Primghar; Molly, Derek, Ari and Sydney Fivelson of Gilberts, IL; Joshua Kaufmann of Bolivia; Nathaniel, Shoshanna and Caleb Kaufmann of Bolivia; Mitchell and Karen Wilson of Primghar and Corrin Wilson of Des Moines; her foreign exchange son and family, Luis, Naomia, Flavio and Filipe De Deus of Brazil; and foreign exchange grandson and family, Marcos, Jenny and Gabriel Goncalves of Houston, TX; sister-in-law, Lois Tjossem-Johnson; nieces, nephews, other relatives and many friends.
She was preceded in death by her husband, D. Warren Wilson; infant twins, her parents and two brothers, Glenn and George.
To order memorial trees or send flowers to the family in memory of Olive F. Wilson, please visit our flower store.