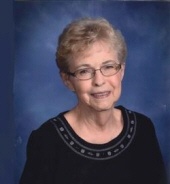 Visitation with family present will be
from 3 5 P.M. on Sunday, July 20, 2014
at the Eldridge Family Funeral Home in Paullina.

CONGREGATIONAL HYMNS
Beyond The Sunset
Just As I Am
Organist: Kay Grosvenor

Arrangements are under the care of the
Eldridge Family Funeral Homes; Paullina, Iowa

Orle Marie Towe, the daughter of John and Mildred (Dale) Freerking, was born on October 9, 1936 in Ute, Iowa. She graduated from Paullina High School in 1954. She married Robert Towe on July 24, 1955. In 1957, the couple moved to the farm where they lived until Roberts passing on January 17, 1995. In 1996, Orle moved into Paullina. She was the bookkeeper for the family plumbing business and was a homemaker. She later worked at Kids Kampus Daycare in Primghar. Orle passed away on Wednesday, July 16, 2014 at the Sutherland Care Center in Sutherland, Iowa reaching the age of 77 years, 9 months and 7 days.
She was an active member at the First Presbyterian Church in Paullina.
Those left to cherish Orles memory are her four children, Steve and his wife, Julie Towe of Alburnett, Iowa; Jim Towe and Cherie Stough of Charles City, Iowa; Jeff and his wife, Linda Towe and Lynn Towe and Greg Burmakow all of Paullina; seven grandchildren, Mariah, Jennifer, Sarah, Melissa, Kayla, Cody and Lucas; four great grandchildren, Morgan, Dugan, Parker and Shelby; also other relatives and friends.
She was preceded in death by her husband, Robert; parents and an infant sister.
To order memorial trees or send flowers to the family in memory of Orle M. Towe, please visit our flower store.