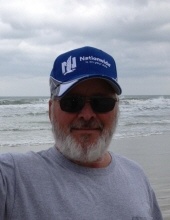 
IN LOVING MEMORY OF
PHILIP “PHIL” A. SHOLLY

In Lieu of flowers
Memorials may be directed to the family

Arrangements by the
Eldridge Family Funeral Home; Paullina, Iowa
PHILIP A. SHOLLY
Philip Allen Sholly, the son of Clarence and Zelma (Otte) Sholly was born October 19, 1954 in Cherokee, Iowa. He received his education in Sutherland Schools graduating with the class of 1972 from Sutherland High School. He attended Northwest Iowa Community College in Sheldon in the carpentry program. On June 22, 1974, he was united in marriage to Valerie Johnson in Primghar, Iowa and to this union three children were born, Angela, Chris, and Erin. The couple later divorced. Phil made his home in Sutherland where for many years he was employed at Dau Construction. He passed away on Monday, August 24, 2020 at the Cherokee Regional Medical Center after being stricken at work reaching the age of 65 years, ten months and five days.
He enjoyed fishing, hunting, NASCAR, going to races, anything outdoors, helping his children and grandchildren. Family get togethers were his favorite.
Phil is survived by his children, Angela (J.T.) Sanow of Remsen, Iowa; Chris (Sarah) Sholly of Granville, Iowa and Erin Sholly of Mendocino, California; four grandchildren, Charity Sholly, Halle Kenney, Christian Sholly and Autumn Sanow; three great grandchildren, Desmond, Xander and Xavier; his brothers and sisters, Pat (Arnold) Letsche of Krugerville, Texas; Tony (Jane) Sholly of Spencer, Iowa; Teresa (Gary) Litka of Sutherland, Iowa; Sandra (Bruce) Bruns of Sheldon, Iowa; David (Kay) Sholly of Hartley, Iowa and Jerry Sholly of Mesa, Arizona also nieces, nephews and many friends.
He was preceded in death by his parents, Clarence and Zelma Sholly

PHIL WAS A GOOD MAN
THAT LIVED A SIMPLE LIFE:
To order memorial trees or send flowers to the family in memory of Philip A. Sholly, please visit our flower store.