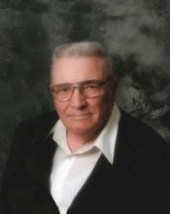 Visitation will be after 3:00 P.M. Monday, December 2, 2013 with the family present from 5 to 7 P.M. Monday at the Eldridge Family Funeral Home in Paullina.

Arrangements are under the care of the
Eldridge Family Funeral Home; Paullina, Iowa
RAYMOND F. DAU
Raymond Henry Fritz Dau was born May 6, 1924, on the family farm south of Sutherland, Iowa, the son of George and Dora (Horstmann) Dau. He attended rural school near his home until the seventh grade and Liberty Township Consolidated School, Calumet graduating in 1941. He worked for his father until 1945, when he enlisted into the United States Army during W.W. II. He took basic training at Ft. McClellan, in Anniston, Alabama, with further training at Ft. Riley, in Manhattan, Kansas. He went overseas to Rome, Italy, where he served one year. He received his Honorable Discharge in January 1947. On June 29, 1947, Raymond was united in marriage to Marilyn Fiddelke at St John Lutheran Church in Germantown. This union was blessed with two children: Dennis and Sheryl. The couple farmed south of Sutherland on his parent’s farm until June 1992, when they retired and moved to Marilyn’s parent’s home in Paullina. In April 2012, Ray and Marilyn moved to the Primghar Care Center. They were privileged to celebrate their 65th wedding anniversary. Marilyn passed away on May 2, 2013 in Primghar and in July, Ray moved to the Community Memorial Health Center in Hartley. He passed away at the Health Center on Friday, November 29, 2013 reaching the age of 89 years, 6 months and 23 days.
Ray enjoyed time spent with his children and their families as well as relatives and friends. Through the years he enjoyed playing the accordion, watching major league baseball, bowling, playing cards and many fishing vacations in Minnesota. Raymond was a member of Bethel Lutheran Church in Sutherland.
Those left to cherish his memory are his children: Dennis (Julie) Dau of Granville and Sheryl (Milt) Hustedt of Sutherland; four grandchildren and nine great grandchildren, Ryan (Trisha) and son, Austyn Dau of Orange City; Daryn (Jackie) and daughters, Madison, Brooklyn and Jaelyn Dau of Orange City; Kristen (Cory) and daughters, Abbie and Allison Watts of Storm Lake; Brent (Becky) and daughters, Lydia, Chloe and Greta Hustedt of Sutherland; a sister and husband, Florence and Dalton Rehder of Paullina and a brother-in-law, Leonard Fiddelke of Cherokee; nieces, nephews, other relatives and friends.
He was preceded in death by his wife, a great grandson, Damen Dau; parents, brothers and their wives, Delbert and Vera Dau, Harold and Velma Dau; sisters and their husbands, Laura and Harry Rohlfsen, Lois and Leonard Breitbarth; brother, Elmer in infancy and a sister, Frances in childhood and sister-in-law, Betty Fiddelke.
To order memorial trees or send flowers to the family in memory of Raymond F. Dau, please visit our flower store.