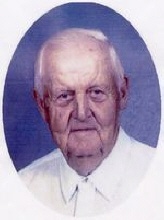 IN MEMORY OF
RAYMOND H. APPELDORN

After the graveside service, relatives and friends are invited
to join the family in the fellowship hall of the church.
RAYMOND H. APPELDORN

Raymond Herman Appeldorn, the son of William and Clara (Puhrmann) Appeldorn Sr., was born January 17, 1913 in Union Township of O’Brien County, Iowa at his parent’s farm home. He received his education in country school and two years at Paullina High School. On February 22, 1942, he was united in marriage to Ella Mesner in Germantown, Iowa. After their marriage, Ray was called into the service during World War II serving in the Military Police. He returned to the Paullina area, where the couple farmed for many years. They moved into Paullina several years ago. His wife preceded him in death on November 7, 2002 in Orange City, Iowa. He remained in the family home until entering the Paullina Care Center on April 27, 2007. He passed away at the Paullina Care Center on Thursday, May 17, 2007, reaching the age of 94 years and 4 months.
He was baptized and confirmed on June 30, 1930, and was currently a member of the Zion Lutheran Church in Paullina. He enjoyed going into town to visit and talk about farming and especially playing cards.
Ray leaves to cherish his memory are one son and his wife, Raynard and Lana Appeldorn of Paullina, Iowa; two daughters and their spouses, Nancy and Bob Kleinhesselink of Orange City, Iowa; Annette and Kenneth Sauer of Paullina, Iowa; also seven grandchildren, eleven great-grandchildren, three sisters-in-law, Luella Appeldorn, Evelyn Appeldorn and Marcella Appeldorn all of Paullina, Iowa; also nieces, nephews and other relatives and friends.
He was preceded in death by his wife, a son, Roger; his parents, three sisters, Viola Hattermann; Elsie Westphal and Norma Andersen; three brothers, Gus, Delbert and William Jr..
To order memorial trees or send flowers to the family in memory of Raymond Herman Appeldorn, please visit our flower store.