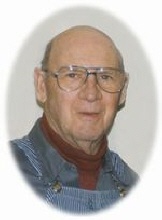 IN MEMORY OF
RICHARD VANDER TUIG

Arrangements are under the care of the
Gaudian-Eldridge Funeral Home

After the graveside service, relatives and friends are invited to join the family in the fellowship hall of the church.

RICHARD VANDER TUIG
Richard Vander Tuig, the son of Peter and Gertrude (Donkersloot) Vander Tuig was born September 1, 1921 near Archer, Iowa. He received his education in country schools. He later worked as a farm hand in the Archer area. He was called into the United States Army during World War II, serving in the 83rd Infantry, known as the “Thunderbolts”. Rich was in the European theater earning a bronze star and two purple hearts. After his discharge he returned to the Archer area and farmed with his dad. In 1950, he was united in marriage to Ruth Van Zyl in Primghar. After their marriage the couple farmed in the Sheldon and Primghar areas. He was also a cattle buyer and was known for his ponies and horses. He entered the Primghar Care Center in 1998 and later transferred to the Sutherland Care Center in June of 1999. He passed away at the Sutherland Care Center on Sunday, January 29, 2006, reaching the age of 84 years, 4 months and 28 days.
He was a member of the American Reformed Church in Primghar and the Chateau-Thierry Post of the American Legion of Primghar. Rich had a love for animals, especially his ponies and horses often giving the children of Primghar rides in his pony cart.
He leaves to cherish his memory, his wife, Ruth of Primghar; two daughters, Blanche and her husband, John Vlieger of Omaha, Nebraska; Roxane McCandless of Waterboro, Maine; a son, Paul and his wife, Sheila Vander Tuig of Baldwin City, Kansas; five grandchildren, Jeremy and his wife, Susan Vlieger; Brandt and his wife, Kaci Vlieger; Jonathan Vlieger; Justin and Amanda Vander Tuig; two great-grandchildren, Avryll and Allie Vlieger; one brother, Mitch and his wife, Matilda Vander Tuig of Primghar, Iowa; and two sisters, Sadie Hilbrands in California; and Gladys and her husband, Don Hylarides of Hudsonville, Michigan; a sister-in-law, Joyce Vande Griend of Hull, Iowa; also other relatives and friends.
He was preceded in death by an infant daughter, Gloria Jean; his parents and a brother, Percy.
To order memorial trees or send flowers to the family in memory of Richard Vander Tuig, please visit our flower store.