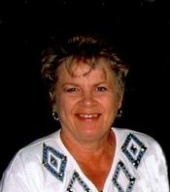 IN MEMORY OF
RITA M. ENGELKE

All are welcome to meet at Gaudian-Eldridge Funeral Home
At 9:45 A.M. to proceed to the cemetery.

Arrangements under the care of the:
Gaudian-Eldridge Funeral Home; Paullina, Iowa


Rita Mae Engelke, the daughter of William and Luella (Frerk) Appeldorn Jr. was born August 25, 1940 on the family farm near Paullina, Iowa. She received her education in country school and later graduated from Paullina High School in 1958. On November 26, 1961 she was united in marriage to Robert “Bob” Engelke at Bethel Lutheran Church in Sutherland. After their marriage the couple settled on a farm near Sutherland for a few months. They moved to the farm where they spent their entire married life three miles east and a half mile south of Paullina, where they farmed for many years. The couple raised their two children Scott and Kris. Rita had a flower drying business called Eve Spout, which she truly enjoyed doing. She passed away on Thursday March 3 after a year long illness at the St. Luke Medical Center in Sioux City reaching the age of 70 years 6 months and 8 days.
She was a member of Zion Lutheran Church in Paullina and was active in church activities and singing in the choir. She was active in the community of Paullina and was always willing to help out. She enjoyed golfing being a member of the Paullina Golf Club and gardening.
Rita leaves to cherish her memory her husband Bob of rural Paullina, one son Scott Engelke of rural Paullina, and a daughter Kris and her husband Mike Noble of Minnetonka, Minnesota, two grandchildren Emma and Jake Noble, also other relatives and many friends.
She was preceded in death by her parents, two brothers Donald Appeldorn in infancy and Robert Appeldorn.
To order memorial trees or send flowers to the family in memory of Rita M. Engelke, please visit our flower store.