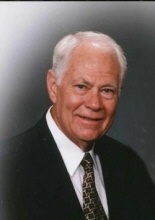 Visitation will be after 3 P.M. on Monday, May 8, 2017
with family present from 5 7 P.M.
at the Eldridge Family Funeral Home in Paullina

MUSIC
His Eye Is On The Sparrow
Duet by: Joel & Andrea Orthmann

In lieu of flowers, memorials may be directed to
Paullina Flying Club.

ROBERT BOB ENGEL
Robert Kenneth Engel, was born July 14, 1933 in Ocheyedan, Iowa to Kenneth Clarence and Orva E. (Ohme) Engel. At two years of age the family moved to Moneta, Iowa where his father ran a gas station and feed/fertilizer business. When Bob was old enough he helped his father at the gas station. In 1950, Bob graduated from Moneta High School and attended Buena Vista College in Storm Lake, receiving a business degree. Bobs first job was a bookkeeping position at Farmers Cooperative Elevator in Paullina where George Rohwer was the manager. In 1958 Bob became the manager and retired from that position in 1990.
Robert married his wife of 63 years, Patricia Orthmann, on August 25, 1953. Their marriage was blessed with three children: Kent, Kimberly, and Kristin. He was a loving husband, father, grandfather and great-grandfather.
Bob was active in the community of Paullina in Lions Club, Chamber of Commerce, Paullina Golf Club, Mill Creek Flying Club and was a session member of the Presbyterian Church. He also enjoyed hunting, fishing, golfing and flying his airplane as well as spending time with family. Bob passed away at Royale Meadows in Sioux Center on Friday, May 5, 2017 at the age of 83 years, 9 months and 21 days. He was preceded in death by his parents.
Left to cherish his memory are his wife, Patricia of Paullina; three children, Kent (Jo) Engel of Everly, Iowa, Kimberly Engel-George of Henderson, Nevada, Kristin (Mike) Ebel of Ireton, Iowa; six grandchildren; Shara, Jared, Grant, Ashlee, Drew and Samantha; five great grandchildren, Taylynn, Gracyn, Tegan, Cooper and Camden; also other relatives and friends.

A limb has fallen from the family tree.
I keep hearing a voice that says,
Grieve not for me.
Remember the best times, the laughter, the song.
The good life I lived, while I was strong.
Continue my heritage, Im counting on you.
Keep smiling and surely the sun will shine through.
My mind is at ease, my soul is at rest.
Remembering all, how I truly was blessed.
Continue traditions, no matter how small.
Go on with your life, dont worry about falls.
I miss you all dearly, so keep up your chin.
Until the day comes when were together again.

Unknown Author-
To order memorial trees or send flowers to the family in memory of Robert 'Bob' Engel, please visit our flower store.