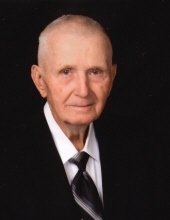 MUSIC
“Amazing Grace, My Chains Are Gone”
Sung by: Mark Richards
CONGREGATION HYMNS
“Because He Lives”
“God Be With You, Till We Meet Again”
Pianist: Mark Richards

In lieu of flowers, memorials may be directed to St. Paul Lutheran Cemetery Fund.

Arrangements under the care of the
Vander Ploeg Funeral Home, Sheldon, Iowa
Robert “Bob” Vander Linden passed away on Saturday, June 15, 2019 reaching the age of 89 years, 10 months and 9 days.
Robert Vander Linden, the son of William and Elizabeth (Van Ravenswaay) Vander Linden, was born August 6, 1929 at Ireton, Iowa. He attended country school through the 8th grade. He helped his father on the farm and worked for area farmers as a hired man. He was drafted into the United States Army on September 7, 1950 during the Korean Conflict and served with the 7th Division, 32nd Infantry Regiment until 1952. He was honorably discharged, July 7, 1952. After being discharged, he drove truck for Bill DeGroot Trucking, Inwood, Iowa. On June 12, 1955, he was united in marriage to Wilma E. Warkenthien at Evangelical Lutheran Church, Willow Lake, South Dakota. They made their home in Sioux Falls, South Dakota for ten years. He drove truck for SoDak Distributing Co, Sioux Falls, South Dakota. In 1966, he moved to Sheldon, Iowa and farmed until 1999 when he retired. He loved the farm.
Bob was a charter member of Grace Lutheran Church, Sioux Falls, South Dakota when he moved to Sheldon, Iowa, he became a member of St. Paul Lutheran Church. He served on the church council at both churches. He served on the Ritter Elevator Board and the Adult Education Board. He was a member of American Legion Post #145 and the VFW #7354 of Sheldon. He was honored to be part of the Avenue of Flags along with his five brothers.
He enjoyed being with family and was very proud of his grandchildren and their accomplishments. Bob enjoyed playing cards, word search books and gardening.
Left to cherish Bob’s memory are his wife of 64 years, Wilma; son, Craig (Krista) Vander Linden; daughters, Linda (Barry) Nieuwenhuis and Brenda Tremmel; five grandchildren, Molly Vander Linden, Ashley (Mark) Ballou-Bonnema, Andrew (Kendra) Vander Linden, Kate Tremmel (fiancé, Joshua Deines), Joshua Tremmel; great grandchildren, Ruby and Paige Vander Linden; step grandchildren, Faith Monen, Amanda (Lee) Verdoorn and Lee (Daisy) Nieuwenhuis; step great grandchildren, Dylan Monen, Tristan and Jamin Verdoorn, Kara, Cameron, Emmett, Owen and Penny Nieuwenhuis; three sisters, Betty (John) Kreykes, Julia (Bob) Merley and Janice Vander Schaaf; three brothers, James Vander Linden, Paul (Phyllis) Vander Linden, Dennis Vander Linden and sister-in-law, Loretta Vander Linden along with many relatives and friends.
Bob is preceded in death by his parents; 2 brothers, William and John Vander Linden, a grandson, Nathaniel Ballou and 2 sisters-in-law, Norma Vander Linden and Rose Vander Linden.

“He plants the seed in springtime, the corn, the beans, the hay.
He prays that God would bless it, a harvest, Lord, I pray.
My father is a farmer, that’s what he’s proud to be.
The values the land taught him, he handed down to me.”
To order memorial trees or send flowers to the family in memory of Robert Vander Linden, please visit our flower store.