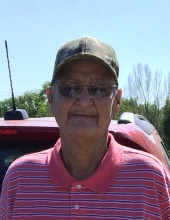 Visitation with family present
will be from 10 A.M. on Saturday, August 25, 2018
until service time at the Eldridge Family Funeral Home in Paullina.

After the graveside service relatives and friends are invited to join the family in the Laue room in the
Paullina Community Building.

Arrangements are under the care of the
Eldridge Family Funeral Home; Paullina, Iowa.
ROGER D. ROBRECHT
On Tuesday August 21, 2018 Roger Dale Robrecht of Paullina, Iowa passed away at the age of 71 at the Orange City Area Health System in Orange City, Iowa. Roger was born March 16, 1947 in Jack County, Texas to Emmett Robrecht and Ruthie Mae (Spradling) Robrecht. Roger received his education in Anadarko, Oklahoma. He entered the Army on July 26, 1966 serving in the Vietnam War and being discharged on June 21, 1968. Roger has one son Raymond James Robrecht of Anadarko, Oklahoma. Roger grew up in Anadarko where he enjoyed helping on the family farm and had a love of cars.
Roger moved to Iowa in 1995 and worked many jobs. From 1997 until his retirement in 2015 he worked for Diamond Vogel Marking Crew working from Orange City, Iowa. Roger enjoyed, wrestling, watching old westerns and NASCAR, fishing, hunting, breakfast at the Hawkeye in Paullina and being around family and friends.
He was preceded in death by his father Emmett and mother Ruthie Mae a grand niece Caitlin Davis.
Roger is survived by one son Raymond J. Robrecht of Anadarko, Oklahoma; three sisters Virginia (Bill) Davis of Paullina, Iowa, Linda Post of Oklahoma City, Oklahoma; Freida (Chris) Taylor of Maysville, North Carolina, many nieces, nephews, grand nieces and nephews, family and friends.

The Lord is my Shepherd; I shall
not want. He maketh me to lie
down in green pastures; He leadeth
me beside still waters. He
restoreth my soul; He leadeth me
in the paths of righteousness for
His name’s sake.
Yea, though I walk through the
valley of the shadow of death, I will
fear no evil; for Thou art with me;
Thy rod and Thy staff they comfort
me; Thou preparest a table before
me in the presence of mine enemies;
Thou anointest my head with oil,
my cup runneth over.
Surely goodness and mercy shall
follow me all the days of my life;
and I will dwell in the house of the
Lord forever.
To order memorial trees or send flowers to the family in memory of Roger D. Robrecht, please visit our flower store.