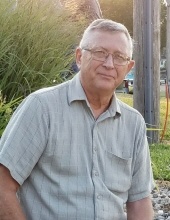 CONGREGATIONAL HYMNS
“Amazing Grace”
“On Eagle’s Wings”
“It Is Well With My Soul”
Organist: LaNan Eldridge

After today’s service service, relatives and friends are invited
to join the family in the fellowship hall of the church.

Ronald Jacob Johannsen, son of Donald and Bernadine (Hagen) Johannsen was born May 25, 1947 in Primghar, Iowa. He was raised on the Hagen family farm outside Gaza, Iowa with his sister, Jane. He attended school at Gaza through elementary, and then graduated from Primghar High School. Out of high school he attended Northwestern College for a short time before enlisting in the United States Air Force. He was stationed in Tampa, Florida at MacDill Air Force Base. After four years in the Air Force, he then returned home and gained employment at Wilson’s in Cherokee, Iowa. While working at Wilson’s, Ron was introduced to the love of his life, Julie Peterson. They were soon married on May 6, 1972 in Marcus, Iowa at the United Methodist Church. They lived in Sioux City, Iowa for a short period where their first child, Jessica Ann, was born on May 8, 1975. They moved from Sioux City to the Hagen Family Farm. There, he ran his own dairy operation and farmed with his dad. Their second child, Peter James, was born July 18, 1977. Ron continued to run the dairy until he sold it in the 1980’s. In February of 1987 he earned a bachelor’s degree in accounting from Buena Vista University. He worked at an accounting firm in Sheldon, Iowa. After this time Ron held many different jobs. Some of these include, coaching in the South O’Brien School District for Jr. High and freshmen girls basketball, Jr. High and freshman football, and Jr. High boys track. He also worked at Iowa State Extension and owned an American Family Insurance office in Primghar. Ron was also very active in the United Church of Primghar, and later in life had the calling to become a Methodist pastor. He was the pastor for 7 years at Galva United Methodist Church and Silver Creek Methodist Church in Holstein, Iowa.

After retirement Ron and Julie enjoyed traveling to Port Arkansas, Texas, Branson, Missouri and Minneapolis, Minnesota to watch Twins baseball. Ron enjoyed seeing his 8 grandchildren and attended every event he could from Grandparents day to athletic events. He was always their biggest fan. Ron was a fun loving guy and was always good for a laugh. He made sure to leave everyone with a smile. Ron had an amazing talent of connecting with friends, family and even strangers.

Ron was preceded in death by his parents, Donald and Bernadine; wife, Julie; father-in-law, Carlyle Peterson and brother-in-law, Stan Schwartz.
To order memorial trees or send flowers to the family in memory of Ronald J. Johannsen, please visit our flower store.