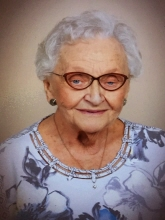 Rosalie Kooistra, age 89, formerly of Sheldon, Iowa, passed away on Friday, April 19, 2019 at Dennis and Donna Oldorf Hospice Home in Hiawatha, Iowa. A celebration of life will be held from 2-4 PM May 25, 2019 at Lighthouse Point, Okoboji, IA. Graveside Services will be at a later date. Rosalie Joan Blomquist, daughter of John and Irene (Milburn) Blomquist, was born January 31, 1930 in Marathon, IA. She lived her youth in the Marathon area and graduated from Marathon High School in 1947. She was valedictorian of her high school class, played the lead in several plays and was editor of the high school newspaper and annual. She was active in 4-H, serving as Buena Vista County president. Rosalie attended Iowa State College in Ames and graduated in 1951 with a bachelor of science degree in home economics education. She was a reporter and section editor at the Iowa State Daily, publicity chairman for the Sweetheart Ball and a State Fair finalist in the "Queen of the Land" contest. Following her college graduation she was a vocational home economics teacher in Wyoming, IA and then in LeMars, IA, where she met her future husband. She was united in marriage to William (Bill) Kooistra on November 20, 1955 at the Marathon Methodist Church. Following their marriage the couple resided in Sheldon, IA where Bill had established The Kooistra Insurance and Real Estate Agency. Rosalie was busy as a mother and homemaker along with being active in church activities, as an officer in the Eastern Star and the adult leader of Rainbow Girls. Rosalie returned to teaching vocational home economics in the Sheldon School system in 1969, continuing until her retirement in 1985. She was a lifelong Cyclone sports fan and very proud of the family legacy of four generations of Iowa Staters. Following her retirement, they maintained their summer home at Lighthouse Point, Lake Okoboji, IA while wintering in Green Valley, Az. More recently she lived in Cedar Rapids, IA actively enjoying her time at the Keystone Cedars Assisted Living Community. Rosalie Kooistra passed away peacefully in her sleep, at the age of 89, on Friday, April 19, 2019, surrounded by her family at Dennis and Donna Oldorf Hospice House in Hiawatha, IA. Those left to cherish her memories are her two sons, William John (Bill) and his wife Madonna and David Charles and his wife Francine, along with their three children, John, Tim and Katie. She was preceded in death by her husband, Bill, and her parents.

To order memorial trees or send flowers to the family in memory of Rosalie Kooistra, please visit our flower store.