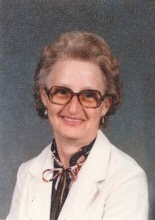 Visitation with the family present will be from
5 to 7 P.M. Friday, March 17, 2017
at the Eldridge Family Funeral Home in Paullina, Iowa

RUTH ANN K. BRUNS
Ruth Ann K. Bruns of Sutherland and formerly of Peterson passed away March 12, 2017 at Pearl Valley Sutherland Care Center at the age of 88 years 6 months and 17 days. She was the daughter of Edward H. and Martha (Jurgenson) Langholz and was born August 23, 1928 at her parents home rural Paullina. She grew up around Paullina and Calumet, and was baptized and confirmed at Zion Evangelical and Reformed Church in Calumet. She received her education at Calumet graduated from there in 1947. She was united in marriage to Leo Bruns on March 10, 1948. In August 1948, they moved to Peterson where they engaged in farming. Leo passed away November 3, 1982 at Peterson. In 1963 they became members of First Congregational Church in Peterson where she had served as deaconess, member of Womens Fellowship and Circle 4 Committee. She was also a member of the Neighborhood Birthday Club south of Peterson where she was the last member left.
After Leos passing she continued to live on a farm and volunteered her time for Green Thumb at Midwest Christian Childrens Home at Peterson for 2 years. She worked at Spencer Dailey Reporter/NW Shopper in Spencer for 13 years and Hyde Chicken Farms of Peterson for 3 years. She had moved to Willoway Heights in Sutherland in August of 2001 and had volunteered as Foster Grandparent at South OBrien Schools in Sutherland for 2 years. She entered the Sutherland Care Center in November 2011.
She and Leo had enjoyed dancing to many old tyme bands in the area and in Minnesota. She enjoyed spending time with her grandchildren, listening to old tyme music on KNUJ, crocheting, bird watching and her many flowers.
Left to cherish her memory are her children, Leatrice (Duane) Kirchner of Dundee, MN and Leslie E. Bruns and friend, (Cindy) of Spencer, IA; grandchildren, Jason (Jennifer) Kirchner of Slayton, MN; Isabel Kirchner and fiance, (Andrew Nelson) of Sioux Falls, SD; Melissa (Rick) Still of Harlan, IA; Brian (Nicole) Bruns of Le Mars, IA; Kayla Bruns and Kyle Bruns of Aurelia, IA; 7 great grandchildren, Azariah and Lola Kirchner of Slayton, MN; Clayton and Kasey Domsch of Harlan, IA; Matthew, Abram, Riley Bruns of LeMars, IA; two step grandchildren, Caiden and Aaliyah of Le Mars, IA; one brother, Keith Langholz of Rose Hill, KS; brother and sisters-in-law, Charles and Evelyn Bruns of Primghar, Richard Bruns of Paullina and Dennis and Janet Bruns of Alton, many other relatives and friends.
She was preceded in death by her husband, Leo; parents, step father, Walter Graesing, sisters, Pauline Wallisand, Betty Lois Bruns, brothers, Orval (Sam) Langholz, sister-in-law, Lynne Langholz, brother and sisters-in-law, Burnell and Clara Koehlmoos, Ralph Bruns, Vernell Hoermann, Darrell and Betty Brotherton, Joan Bruns, nieces and nephews, Ellie Bruns, Ricky Bruns, Lawrence Keating, Terry Peters and Bernita Hartnett.

Footprints
One night I had a dream. I was walking
along the beach with the Lord, and across
the skies flashed scenes from my life. In
each scene I noticed two sets of footprints
in the sand. One was mine, and one was the Lords.
When the last scene of my life appeared
before me, I looked back at the footprints in
the sand, and to my surprise I noticed that
many times along the path of my life there
was only one set of footprints. And I noticed
that it was at the lowest and saddest times in my life.
I asked the Lord about it. Lord, you said
that once I decided to follow you, you would
walk with me all the way. But I notice that
during the most troublesome times in my life
there is only one set of footprints. I dont
understand why you left my side when I needed you most.
The Lord replied, My precious child, I
love you and would never leave you. During
your times of trial and suffering, where you
see only one set of footprints, I was carrying you.
To order memorial trees or send flowers to the family in memory of Ruth Ann K. Bruns, please visit our flower store.