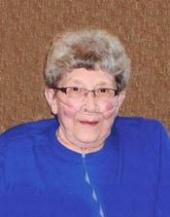 
RUTH E. SCHROEDER
Ruth Elaine Schroeder, the daughter of Milt and Hilda (Jebsen) Crosser was born June 13, 1934 in Primghar, Iowa. She received her education in Primghar and graduated from Primghar High School in 1952 and furthered her education at Commercial Extension in Omaha, Nebraska. On February 20, 1954, she was united in marriage to Jack Schroeder in Primghar, Iowa. After their marriage the couple made their home in Paullina, where Ruth was employed at Pauling’s Grocery Store. The couple moved to Willmar, Minnesota in 1967, where Ruth was employed at the J.C. Penny Store. The couple retired and moved to Primghar in 1983. Her husband preceded her in death on December 27, 1993 in Primghar. She continued to make her home in Primghar until five years ago, when she moved closer to her daughter in St. Michael, Minnesota, later moving to the Lake Ridge Care Center in October of 2010. She passed away on Saturday, July 16, 2011 at the North Memorial Health Center in Robbinsdale, Minnesota reaching the age of 77 years, 1 month and 3 days.
She enjoyed spending time with her family, reading, crossword puzzles, crocheting, gardening and playing cards.
Ruth leaves to cherish her memory her daughter, Lynn and her husband, John Hodgin of St. Michael, Minnesota; a son, Edward and his wife, Myrna Schroeder in Idaho; seven grandchildren, six great grandchildren, a brother, Sam and his wife, Bonnie Crosser of Spencer, Iowa; also other relatives and friends.
She was preceded in death by her husband, her parents, a brother in infancy, Bobby Lee; and a sister, Bernice Powers.
To order memorial trees or send flowers to the family in memory of Ruth E. Schroeder, please visit our flower store.