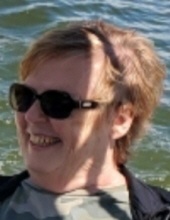 Sandra K. Stofferan
Primghar, Iowa
Services for Sandra K. Stofferan, age 70, of Primghar who passed away on Wednesday, November 25, 2020 at the Sanford USD Medical Center in Sioux Falls, South Dakota. Her funeral service will be 10:30 A.M. Wednesday, December 2, 2020 at Oakdale Evangelical Free Church, rural Meriden with Rev. David Cooper ~ officiating.
Burial will be at Prairie View Cemetery in Paullina.
Visitation with no family present will be on from 5 – 7 P.M. on Tuesday, December 1, 2020 at the Eldridge Family Funeral Home in Paullina.

Masks are required for the visitation and the church service
And social distancing guidelines will be followed.

Online condolences can be sent to eldridgefamilyfuneralhomes.com

In lieu of flowers, memorials may be directed to:
Humane Society of your choice.

Arrangements are under the care of the
Eldridge Family Funeral Home; Paullina, Iowa
SANDRA K. STOFFERAN
Sandra Kay Stofferan the daughter of Marlin E. and Mary Ann (Ebel) Fischer was born May 27, 1950 in Cherokee, Iowa. She received her education in Calumet and later graduated from Sutherland High School in 1968. She furthered her education at Buena Vista College in Storm Lake where she excelled in debate and mock trial. On October 19, 1968 she was united in marriage to Martin Stofferan at the Little Brown Church in Nashua, Iowa. After their marriage the couple lived in Sanborn for four years before moving to Paullina in 1973. The couple remained in Paullina until moving to Canton South Dakota in 2007 and remaining there before moving to Primghar two years ago. Sandy was employed at the Stein Law Office as a paralegal and for many years was bookkeeper for her husband’s tiling business. Sandy passed away on Wednesday November 25, 2020 at the Sanford Medical Center in Sioux Falls, South Dakota reaching the age of 70 years 5 months and 28 days.
While in Paullina the couple attended Oakdale Evangelical Free Church. She enjoyed family times especially with her grandchildren. She collected antiques, loved to dance, her cats and taking rides in the country enjoying the color of the tress especially the blue spruce.
Sandy is survived by her husband Martin of Primghar, Iowa; two children Jim and his wife Liz of Paullina, Iowa and Nikki and her husband Dick Kersten of rural Granville, Iowa; two grandchildren Drake Jungers of Calumet, Iowa and Orin Stofferan of Unityville, South Dakota; four sisters Dianna and her husband Adrian Collins of Carrollton, Texas; Barbara and her husband Doug Matthiesen of Gilbert, Arizona; Valerie Fischer of Jackson, Minnesota and Kimberly Fischer of Sheldon, Iowa one brother Douglas Fischer of Apache Junction ,Arizona; nieces, nephews, cousins and other relatives and many friends.
She was preceded in death by her parents, infant brother William and her grandparents Rhiney and Velma Ebel.
To order memorial trees or send flowers to the family in memory of Sandra "Sandy" Stofferan, please visit our flower store.