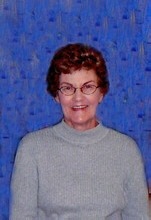 IN MEMORY OF
SHARON K. OTTO

Arrangements under the care of the
Gaudian-Eldridge Funeral Home
SHARON K. OTTO
Sharon Kathryn Otto, the daughter of William and Zoe (Yeager) Toal was born December 31, 1939 on the family farm near Moneta, Iowa. She received her education in Primghar schools graduating from Primghar High School in 1958. One of her high school memories was being the homecoming queen. On March 15, 1963 she was united in marriage to Paul Feldotto in Sutherland, Iowa.
After their marriage the couple made their home in Paullina. She worked as a cook at the Paullina School and later as a cook at the O’Brien County Home near Primghar. Paul passed away on December 9, 1983 in Primghar. Sharon was united in marriage to Michael Otto in Las Vegas, Nevada on January 27, 2000 and the marriage was later confirmed at the Sacred Heart Catholic Church in Sutherland on December 25, 2000. After their marriage the couple remained in Paullina. She passed away on Wednesday February 18, 2009 at the Mercy Medical Center in Sioux City reaching the age of 69 years, 1 month and 17 days.
Sharon was a member of St. Anthony’s Catholic Church in Primghar and the Guild of the church. She enjoyed spending time with her grandchildren, cooking and traveling.
Sharon is survived by her husband Mike of Paullina, a daughter and her husband Lori and Shawn Reese of Aurora, Colorado; twin sons Tom and his wife Tracey Feldotto of Urbandale, Iowa and Tim and his wife Carol Feldotto of Southlake, Texas; step-children Michelle and her husband Mark Field of Liberty, Illinois; John and his wife Jenny Otto of Oro Valley, Arizona; Dean and his wife Sarah Otto of Hospers, Iowa, and DeeAne Otto of Omaha, Nebraska; twelve grandchildren, Nick and Savannah Reese; Conner, Sara, Kelcie, Tayler, and Kolby Feldotto; Abigail and Allison Field; Emily, Andrew and Chloe Otto; two sisters, Bev Raymond of Primghar and Pat (Merlynn) Miller of Sheldon; three brothers Jon (Cindy) Toal of Ft. Dodge, Iowa, Daniel (Doris) Toal of Urbandale, Iowa and Michael Toal of Deloit, Iowa; also nieces ad nephews and other relatives and friends. She was preceded in death by her parents, a grandson Michael Field, two sisters Loraine Sanders and Barb Bierry.
To order memorial trees or send flowers to the family in memory of Sharon K. Otto, please visit our flower store.