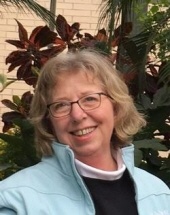 Visitation will be after 4 P.M. on Wednesday, March 22, 2017
with family present from 5 7 P.M.
at the Eldridge Family Funeral Home in Primghar

CONGREGATIONAL HYMN
We Are One In The Spirit
Organist: LaNan Eldridge

SHARON L. FRITZSCHE
Sharon Lynn (Schoof) Fritzsche of Primghar, Iowa, passed away peacefully at home surrounded by her husband, son and daughter on March 19, 2017 from cancer. Sharon was born in Sheldon, Iowa on February 14, 1955. Family, friends and co-workers always made her birthday extra special because her day was shared with Valentines Day.
Preceding her in death, is her father, Leonard Schoof, father-in-law, Donald Fritzsche and brothers-in-law, Dave Rohwer and Mark Langholz.
Sharon is survived by her husband, Greg Fritzsche, two children, Joshua Jon (Kristal) Fritzsche, Heather Fritzsche and two grandchildren, Brianna and Katelyn Fritzsche. Mother, Naoma Schoof, mother-in-law, Jessie Fritzsche and father-in-law, Bruce Meyer (Maureen Mahoney), three sisters and one brother, Sandy (Dave) Rohwer, Sue (Mark) Langholz, Steve (Cheryl) Schoof and Sherry (Lyle) Tifft, sisters and brothers-in-law, Kim Cothren, Lynn Partin, Julie Meyer, Rachel (Eloy) Preciado, David (Cheryl) Meyer, Dan (Chieme) Meyer and Tony Lundstrom, nieces, nephews and a host of many other relatives.
Sharon grew up in Spencer and Paullina and graduated from Paullina High School on May 1973. She was united in marriage on April 7, 1974 to Gregory Fritzsche. As a young woman, Sharon taught Sunday school, went to school for fashion design, was active in Jaycees, community activities, a Girl Scout Leader, helped with Boy Scouts and tutored. Throughout Sharons career she drove the Regional Area Transit Bus, worked at the Old Fashion General Store in Primghar and babysat for a few years, making special bonds with the children. Sharon then decided to further her education. While raising her family and through her courage, determination and commitment she received her 2-year degree at Iowa Lakes Community College and B.A. in Social Work from Northwestern College. During the last 25 years, with Sharons loving grace, she touched hundreds of lives through her work with Home Health and Hospice. 23 years were as the Hospice Social Worker. She loved and was loved by many. Sharons granddaughters will always remember her as a good grandma, that she was nice, and that she always had toys for them to play with.

We love because he first loved us.

Precious in the sight of the Lord is the death of his faithful servants.

Psalm 116:15
To order memorial trees or send flowers to the family in memory of Sharon L. Fritzsche, please visit our flower store.