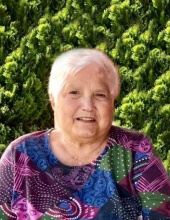 Visitation will be after 3 P.M. on Friday, February 16, 2018
with family present from 5 - 7 P.M.
at the Eldridge Family Funeral Home in Paullina.

After the graveside service relatives and friends are invited to join the family in the Germantown Community Center.

Arrangements under the care of the
Eldridge Family Funeral Home Paullina, Iowa
SHIRLEY J. EBEL
Shirley Jean (Rehder) Ebel, daughter of Emil and Hilda (Jurgensen) Rehder, was born April 2, 1929, in O’Brien County near Gaza, Iowa. She received her education and graduated from Gaza Consolidated High School in 1946. Shirley was baptized at the Evangelical Church in Calumet and later confirmed at St. John Lutheran Church, Germantown, Iowa. After receiving her Teaching Certificate from Iowa State Teacher’s College in Cedar Falls, she taught 3rd and 4th grades at Grand Meadow.
On June 1st, 1948, Shirley was united in marriage to Roy H. Ebel on the lawn of the Rehder family farm. After their marriage, Roy and Shirley farmed near Gaza for 10 years before moving to the Ebel family farm near Germantown in 1958. Roy and Shirley worked side by side on the farm and in their community while raising their seven children.
Shirley was a member of St. John Lutheran Church in Germantown where she was active in Ladies Aid, LWML, and Silver and Gold. She especially enjoyed quilting and being a Lutheran Braille worker. Shirley was also a member of the American Legion Auxiliary.
The majority of Shirley’s time was spent tending to and loving her family; instilling strong Christian values in a home filled with joy and laughter. She was an excellent cook and baker, and was known for her Zwieback, dinner rolls and cranberry ice. Shirley enjoyed biking, walking, card playing, puzzling, and she was a pioneer recycler.
Roy and Shirley retired and moved into their new home in Paullina, Iowa in 1984. Shirley and Roy enjoyed traveling, especially to visit grandchildren, and had many fond memories of family reunions at Camp Okoboji. Roy passed away on July 13, 2000.
Shirley leaves to cherish her memory her children, Steve (Ronda) Ebel of Henderson, Nevada, Jean Gnade (Mark Puhrmann) of Paullina, Iowa, Julie Shanklin of Omaha, Nebraska, Joyce Hetletvedt (Jerry Wegehaupt) of Paullina, Iowa, Sally (Tim) Kraayenbrink of Fort Dodge, Iowa, Scott (Kelly) Ebel of Granville, Iowa, and Sheryl (Dan) Paskevic of Omaha, Nebraska; 22 grandchildren; 26 great-grandchildren; 2 great-great-grandsons; sisters, Margaret Perry of Primghar, Iowa, and Ruby Miller of Paullina, Iowa, brother, Curtis (Betty) Rehder of Sutherland, IA, a sister-in-law, Yvonne Rehder of Thornton, CO, as well as a host of other relatives and friends.
Shirley was preceded in death by her parents, her husband, sons-in-law, Daniel Hetletvedt and Jim Gnade, great-grandchild, Jesse Gnade; a brother, Burdette and a sister, Erma.

“Earth to earth,
ashes to ashes,
dust to dust,
in the sure and certain hope
of the resurrection to
eternal life
through our Lord Jesus Christ”
To order memorial trees or send flowers to the family in memory of Shirley Ebel, please visit our flower store.