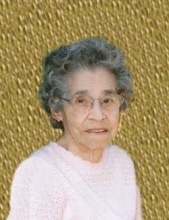 Visitation will be from 10 A.M. Saturday until the time of the Service
at the First Presbyterian Church in Paullina
the Eldridge Family Funeral Home of Paullina
is in charge of arrangements.

MUSIC
Because He Lives
Nearer to the Heart of God
Sung by: Jim Warren

Arrangements under the care of the
Eldridge Family Funeral Home; Paullina

THEO K. WILLEY
Theo Kathryn Willey, the daughter of Vern A. and Marie (Eulberg) Cook, was born February 2, 1917 in Ruthven, Iowa. She moved to the Sanborn, Iowa area with her family where she received her education. While working for Dr. Wagner in Primghar she met and later married Gerald Gary Willey on June 19, 1939 at the Little Brown Church in Nashua, Iowa. After their marriage the couple moved to Paullina, Iowa where they made their home. She raised her children and worked at home as a seamstress, she was also a professional tailor doing suit alterations for Schuberts, Waldhelms and Don Dawsons clothing stores in Paullina. Gary preceded her in death on August 13, 2001 in Sioux City, Iowa. She remained at the family home until entering the Primghar Care Center on December 3, 2010. She passed away at the Primghar Care Center on Wednesday, June 4, 2014 reaching the age of 97 years, 4 months 2 days.
She attended the United Methodist Church in Paullina until it closed and later the First Presbyterian Church. She enjoyed spending time with her family and her many sewing projects.
Left to cherish her memory are her daughter, Marla Erick of Paullina; one granddaughter, Dawn and her husband, Tito Vargas and their children, Adison and Devin all of Gold Canyon, Arizona; also other relatives and many friends.
She was preceded in death by her husband, two sons, Richard in infancy and Roger on September 3, 2003; her parents, two brothers, Art and Ron Cook and one sister, Lucille Johnson.
To order memorial trees or send flowers to the family in memory of Theo K. Willey, please visit our flower store.