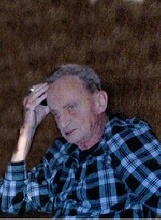 IN MEMORY OF
THOMAS A. HORTON

After the graveside service relatives and friends
are invited to join the family in the fellowship hall
of the Church of Christ in Primghar .

Memorials may be directed to the: Beecan Foundation and the Northwest Iowa Home Health and Hospice.
THOMAS A. HORTON
Thomas Allen Horton, the son of H.A. and Irene (Carey) Horton was born September 9, 1942 in Le Mars, Iowa. He received his education in schools in Merrill, Iowa and in Arkansas, before returning to Iowa and graduating from the Le Mars High School. After high school he joined the U.S. Navy which he served in for three and a half years. On May 20, 1963, he was united in marriage to Helen Wright in Saint John, New Brunswick, Canada. After their marriage the couple lived in Canada for a short time before moving to Iowa and they lived in Merrill, Marcus and in September of 1968 they moved to Gaza, Iowa. He worked for Wilson Packing Plant for 23 years before he began over the road trucking working for various trucking firms, but mostly for Van Wyk Trucking in Sheldon. He retired from Van Wyk’s in December of 2008. He passed away at his home in Gaza on Monday, April 6, 2009, reaching the age of 66 years, 6 months and 27 days.
He enjoyed spending time with his family, collecting coins and doing jigsaw puzzles.
Thomas is survived by his wife, Helen of Gaza; seven children, Dianna and her husband, Mark Sigmon of Sac City, Iowa; Jeffrey A. Horton in Maine; Richard A. and his wife, Shirley Horton stationed in Japan with the Air Force; Karen and her husband, Stacy Buck of Paullina; Neil A. Horton of Gretna, Nebraska; Marcia and her husband, John Major of Correctionville, Iowa and Andrew M. Horton of Primghar; also 17 grandchildren and 4 great-grandchildren, two sisters, Mary and her husband, Jim Strub of Merrill, Iowa and Connie Wiemer and husband, Frank Fogerty of Des Moines; also other relatives and many friends.
He was preceded in death by his parents.
To order memorial trees or send flowers to the family in memory of Thomas A. Horton, please visit our flower store.