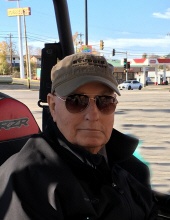 Timothy S. Griffin
Sheldon, Iowa
Timothy S. Griffin, age 68 of Sheldon, Iowa who passed away on Monday, December 18, 2017 in Sturgis, South Dakota. His Memorial Service will be at 10:30 A.M. Saturday, March 17, 2018 at the Living Water Community Church in Sheldon, Iowa with Pastor Jason Van Wyk ~ officiating.
Burial will be in the St. Patrick Catholic Cemetery in Sheldon, Iowa.
Visitation will be from 4:00 – 7:00 P.M. on Friday, March 16, 2018 at the Vander Ploeg Funeral Home in Sheldon.
Arrangements are under the care of the Vander Ploeg Funeral Home in Sheldon.
Timothy Shamus Griffin was born on November 1, 1949 to Jim and Beverly (Smith) Griffin in Sheldon Iowa. He lived there until graduating from Sheldon High School in 1968. Tim kept in close contact with many of his high school friends and always enjoyed retelling stories from those years.
After graduation, he attended college for a short time before entering the US Army at Fort Louis, Washington, in 1970. He was then assigned to the 518th Engineers in Long Binh, South Vietnam where he attained the rank of Specialist E-5 and was honorably discharged late in 1972. Even out of an experience like that, he made some lifelong friends. He then returned to the farm in Sheldon and finished college with a degree in air conditioning and refrigeration. Tim was then employed for several years as a technician with Mid-America Pipeline at Sanborn and Whiting, Iowa. He married Jan Myers on April 2, 1979 in Oahu, Hawaii. The couple moved to Saudi Arabia where Tim worked as a large frame engine technician for Arabian American Oil Co./ARAMCO until 1983. When they returned to Iowa, he began farming the family farm. In 1989 & 1992, they traveled to Lima, Peru where they adopted their daughters, Ashley and Katerina. Jan passed away in 1999.
While he didn’t make it to his beloved Ireland, his heritage that he was so proud of, he did enjoy traveling different areas throughout the years and making friends along the way. He never
knew a stranger or at least not for long. Tim had a quick wit and great sense of humor. He loved history and had an unbelievable memory, especially for historical events in the Black Hills area. He grew up coming out to the Black Hills as a young child with his family. He continued with Jan and the girls, and later with friends camping, 4-wheeling and Harley-Davidson motorcycling. Tim began his lifelong dream of building a cabin in the Black Hills in 2013, overseeing and doing most of the work himself with “experts” he found along the way in different areas. He was a master at repurposing things from the farm and that he had collected over the years for “The High Lonesome”, his 10 acre ranch in the Vanocker Canyon; however, it was far from lonesome as he formed an instant bond with all the neighbors and friends throughout the years. Typical Tim, neighbors in the canyon said that if they were in a city, Tim would have been mayor. It will definitely be more lonesome without him in the area. The luck of the Irish would often shine on him as he made the occasional trip to Deadwood, playing the lucky lion in the casino.
The past few years, he renewed a friendship from years ago with Celeste (aka Fred) Simoff. They enjoyed summers in the hills and winters in Florida, still leaving time for planting in the spring and harvesting in the fall. Tim loved nothing better than going for a ride in the hills on his Polaris - by himself, with Fred or Kate, or friends that he was showing around. Many know that Tim was a very private person, however he was very active in the recovery community helping others that had struggled with addictions of any type with personal encouragement and helped many have a second chance in life that enabled them to have a successful start on a good life that many thought not possible for them.
Tim passed away peacefully on December 18, 2017, in the Black Hills area of South Dakota he
so loved and was able to spend the last months of his life.
Tim is survived by his daughter, Kate; and his companion, Celeste Simoff, both by his side in his courageous battle with cancer. He is also survived by his twin sister, Teresa, and sisters Nancy, Peggy and Ralean.
Tim was preceded in death by his parents, his wife Jan, and his older daughter, Ashley.

In lieu of flowers, memorials may be made to the American Cancer Society or the charity or organization of your choice.

“May the road rise up to meet you, may the wind be always at your back, may the sun shine warm upon your face, the rains fall soft upon your fields and, until we meet again, may God hold you in the palm of his hand.” - Irish Blessing
To order memorial trees or send flowers to the family in memory of Timothy S. Griffin, please visit our flower store.