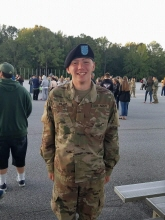 Tristen M. Miller, age 19, of Sheldon, Iowa, died at his home in Sheldon on Saturday, May 5, 2018. Memorial Services will be Sunday, May 20, 2018 at 11:00 A.M. at the Iowa National Guard Armory in Sheldon, Iowa. Tristen Michael Miller was born on January 18, 1999, in Sibley, Iowa. He is the son of Kimberly Miller and Robert Burrington. Tristen lived his youth in Sibley where he attended school, until the age of 12. He moved to Sheldon, Iowa where he attended school and was a member of the Game Club. He graduated from Sheldon High School in 2017. Tristen enlisted in the National Guard of Iowa, Unit 2168 Transportation Company in Sheldon, Iowa and received basic training in Fort Benning, Georgia and advanced infantry training at Fort Leonard Wood, Missouri. He was employed by Service Master at the present time. Tristen was a very loving and caring person and enjoyed joking around. He loved animals, especially his cat, Kidder and 3 dogs, Max, Tinkerbell and Littleman. He died on Saturday, May 5, 2018 at his home in Sheldon. Those left to cherish his memories are his mother, Kim Miller; his father, Robert Burrington; step father, Travis Miller; brother, Donovan Miller; sister, Kaliegh Burrington; grandparents, Daryl Gruis, Vicky Burrington, Marc Burrington, and Dianna Roetman. He was preceded in death by grandmother, Colleen Van Engen and grandfather, Dale Van Engen.

To order memorial trees or send flowers to the family in memory of Tristen Miller, please visit our flower store.