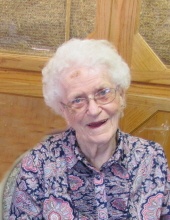 After the graveside service relatives and friends are invited to join the family at the Laue Room in the
Paullina Community Building.

I was born on November 16, 1925, on the family farm in rural Paullina, O’Brien County, IA. I attended 12 years of school in Calumet Iowa, graduating in 1944. After graduation I attended one year of school at A.I.B. in Des Moines, IA. I was a secretary and bookkeeper at Cherokee Mental Health for a while before I began working at the telephone company at Spirit Lake, IA. After three years I transferred to Denver, CO to work for Mountain Bell. I transferred to Boulder, CO after 8 years to work as Chief Operator. After 11 years, I transferred back to Denver as Force Manager opening up the new TSPS system. I worked here until my retirement in 1981 from US West Telephone Co. after 33 years. My retirement gift to myself was to travel to all 50 states in one year. I made this promise to myself when I was in the third grade. I missed it by a couple days of completing my goal. After retirement, I managed a couple of apartment buildings that my brother Harley and I owned together. We sold these building in 1991 and built a new home in Montrose Colorado. As a retiree, I’ve been involved in the Golden West Pioneers and involved in highway clean-up and distributing books to kindergarten children in Montrose.
I have traveled to 22 different countries and seven times to Europe where I visited many of the Strahmann and Nissen relatives. Nearly every October, Harley and I would visit Iowa to check up on the crops and visit all the relatives there. I have always kept in touch with many families in Germany as well as first, second and third cousins in the US. There is no relative in this country that I did not personally know. I enjoyed researching and writing the three family tree books, the Strahmann, the Nissen and the Bockhop. This was a legacy that I left to my family researching the family histories back 13 generation in Germany. I am a loyal Denver Broncos fan.
In 2003, Harley and I built another new home in Montrose CO. My health deteriorated in later life. Several Hip surgeries have kept me from being active. We lived there until in 2013 when Harley decided that we had better move back to Iowa to be closer to family and friends. So we built a third new house in Paullina IA. We lived there until Harley’s death in September 2015. I then moved to the Sutherland Care Center until June of 2019, when I moved to the Prairie View Campus in Sanborn.
It was time for me to leave you all and I hope we shall meet again one day. Remember your dash in life may be only a short while so slow down, smell the roses and show appreciation and respect to others and love the people in your life. Thank you again for being one of my dashes between the years.
Verlee is survived by her sister Joan Sauer of Gardnerville, NV, her niece Debbie and husband Micky Riley of Markleeville, CA, great nephew David Duran and son Riley of Gardnerville, CA , great niece Melissa and husband Kasey Compton and Mackenzie, Konnor and Kole Compton of Gardnerville, and special “granddaughter” Sarah Wohlert, family/friends Dennis and Nelda Dickmeyer and Edward Johannsen of Sutherland.
She was preceded in death by her parents, John and Katherine Nissen Strahmann, brother Harley Strahmann, brother-in-law Wilbur Sauer, nephew William Sauer.
To order memorial trees or send flowers to the family in memory of Verlee Strahmann, please visit our flower store.