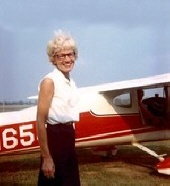 IN MEMORY OF
VIOLETA M. MERRY

Arrangements under the care of the:
Gaudian-Eldridge Funeral Home

Violeta M. Merry, the daughter of William and Ella (Wright) Miller was born April 22, 1927 in Primghar, Iowa. She received her education in Primghar schools and graduated from Primghar High School in 1944. After her graduation she remained in Primghar and was employed by the Farm Bureau, R.E.C.; Smith and Grigg Law Office and before her retirement, she was employed at the O’Brien County Recorder’s Office. Her retirement years were spent in Primghar. She passed away on Monday, January 12, 2009 at the Primghar Care Center, reaching the age of 81 years 8 months and 20 days.
She was a member of the United Church of Primghar. When Violeta was younger she had her pilot’s license and she always enjoyed her reading.
Violeta is survived by one son, William and his wife, Cherie Merry of Harker Heights, Texas; three grandchildren, Beth, Dianna and Jodi; six great-grandchildren, Sophia, Alex, Abigail, Michaela, Matthew and Madeline; also one brother and his wife, Glenn and Carol Miller of Des Moines, Iowa; also nieces, nephews and other relatives and friends.
She was preceded in death by her parents, one brother, Howard; and two sisters, Ruth and Hazel.
To order memorial trees or send flowers to the family in memory of Violeta M. Merry, please visit our flower store.