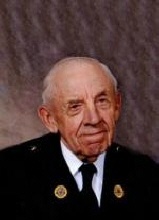 IN MEMORY OF
WALLACE E. TESCH

Visitation will be after 2 P.M. Tuesday, May 4, 2010 with the family present from 5 to 7 P.M. Tuesday at the Gaudian-Eldridge Funeral Home in Paullina.

After the graveside service relatives and friends
are invited to join the family at the
American Legion Community Building in Paullina.

Arrangements under the care of the
Gaudian-Eldridge Funeral Home
WALLACE E. TESCH
Wallace Edward Tesch was born June 22, 1925 at the family farm home in Caledonia Township of O’Brien County, Iowa, to Edward and Minnie (Lange) Tesch. He was baptized on July 19, 1925 at St. John Lutheran Church in Germantown and was confirmed in this faith on May 21, 1939 at Zion Lutheran Church in Paullina. His confirmation verse was Luke 11:28.
Wallace was united in marriage to Dorothy Ann Brandt on September 16, 1951 at the American Lutheran Church in Melvin, Iowa. Two children were born to this union, Thomas Ray on October 10, 1952 and Tamara Kay on December 16, 1959.
Wallace lived within 5 miles of Germantown during all the years growing up, attending several country schools as well as St. John and Zion Lutheran Schools. He entered the United States Army in 1944 and was sent to the Philippines for one year. He then served in Korea for six months. He was honorably discharged on July 29, 1946. When he returned home, he worked for Bing Miller driving a grocery delivery truck. Wallace and Dorothy farmed their entire married life. They moved to Paullina on March 1, 1989. He worked various jobs while still on the farm, working for the ASCS Office in Primghar and driving school bus 23 years for South O’Brien Schools.
He remained an active member of St. John Lutheran Church in Germantown and served as head usher for a number of years. He had been a member of the Russell West Post of the American Legion since 1974 and has held almost every office and currently was serving as the adjutant. Wallace enjoyed fishing, playing cards, having coffee with his buddies, and most of all spending time with his family and friends. He was a devoted, loving husband and father.
Wallace passed away on Sunday, May 2, 2010 at the Orange City Area Health System reaching the age of 84 years, 10 months and 10 days.
Wallace is survived by his wife, Dorothy Tesch of Paullina, one son, Thomas and his wife, Peggy Tesch of Paullina and one daughter, Tammy and husband, Larry Rozeboom of Spencer; one brother, Junior Tesch of Paullina and one sister, Eunice Johnson of Cherokee; also other relatives and many friends.
He was preceded in death by his parents and one sister, Catherine Tesch.
To order memorial trees or send flowers to the family in memory of Wallace E. Tesch, please visit our flower store.