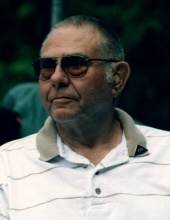 IN LOVING MEMORY OF
WESLEY REHDER

MUSIC
CD ~ “His Eye Is On The Sparrow”
CONGREGATIONAL HYMNS
“How Great Thou Art”
“The Old Rugged Cross”
Organist: Shirley Lenhart

After today’s service, relatives and friends are invited
to join the family in the fellowship hall of the church..

Wesley William Rehder, the son of William and Cecilia (Clausen) Rehder was born on March 21, 1934 in Cherokee, Iowa. He attended Calumet School and graduated from Calumet High School in 1953. On November 8, 1953 he was united in marriage to Mavis Hattermann at Zion Lutheran Church in Paullina. On March 24, 1954 Wes was enlisted in the United States Army. He was honorably discharged in March of 1956. After being discharged Wes and Mavis eventually made their home on a farm outside of Calumet where he farmed and raised dairy cows. The couple then moved to Paullina in 2004. On February 5, 2018, Wes passed away at Sanford USD Medical Center in Sioux Falls, South Dakota reaching the age of 83 years, 10 months and 14 days.
Wes was a member of the Sutherland Church of Christ. He enjoyed fishing, scroll sawing and woodworking and spending time with his family.
Left to Cherish Wesley’s memory is his wife of 64 years, Mavis of Paullina; children and their spouses, Murray Lynn and Kathy Rehder of Chandler, Arizona, Kimberly Sue and Gary Wiles of Denison, Iowa and Rickey Jay and Bambi Rehder of Gold Bar, Washington; six grandchildren, Erin, Jamie, Rachel, Miranda, Jennifer and Nickolas; 20 great grandchildren, Colton, Julia, Lincoln, Maxwell, Claire, Madilyn, Stella, Jack, Alice, McKennen, Oliver, Daisy, Mykah, River James, Quincy, Anniston, Rehder, Tobin, Amelia and Teagyn; also brothers and sisters-in-law, nieces, nephews other relatives and friends.
Wesley was preceded in death by his parents; a sister, Lois in infancy and a brother, Lloyd.
To order memorial trees or send flowers to the family in memory of Wesley Rehder, please visit our flower store.