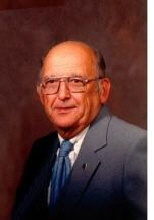 MUSIC
“Amazing Grace”
“What a Friend We Have in Jesus”
Sung by: Rodd Holtkamp
Organist: Lynette Thompson

William Howard Webb, the son of Ward and Marie L. (Klink) Webb was born May 4, 1920 in Primghar, Iowa. He attended country school and later graduated from Primghar High School in 1938. Bill was called into W.W. II where he served in the Army Anti-Aircraft in the Philippines and Japan and was discharged in 1946. In February of 1944, he was united in marriage to Rita LeVangie in Quincy, Massachusetts. After Bill’s discharge from the Army the couple moved to Primghar to make their home. Bill ran the Standard Oil Station in Primghar. He later delivered milk for Blue Bunny and before his retirement he worked for Wilson Meats in Cherokee. In January of 2009, he moved to the Primghar Care Center to make his home. He passed away at the Care Center on Wednesday, December 29, 2010 reaching the age of 90 years, 7 months and 25 days.
He was a member of the St. Anthony’s Catholic Church in Primghar and the Chateau-Thierry Post of the American Legion of Primghar. He enjoyed having a garden, playing cards, fishing and refurnishing furniture.
Bill is survived by his wife, Rita of Primghar, five children, William and his wife, Mary Webb of Colton, California; Beverly Ann Stofferan of Dodge City, Kansas; Brian and Sue Webb of Imperial, California; Beth and Steve Wittrock of Primghar and Bonna Webb of Dodge City, Kansas; 11 grandchildren, 18 great grandchildren, one brother, Lester Webb of Cherokee, Iowa; also other relatives and friends.
He was preceded in death by a son, Bruce; a daughter, Darlene; grandchildren, Michelle and William; his parents and a sister in infancy.
To order memorial trees or send flowers to the family in memory of William H. Webb, please visit our flower store.