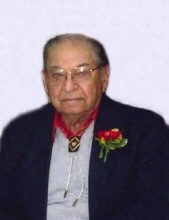 MUSIC
That Sounds Like Home to Me
Sung by: Pastor David Poppen

ABE J. VAN ROEKEL
Abraham (Abe J.) Van Roekel was born on December 24, 1917 at Boyden, Iowa to John A. and Gertrude (Van Stryland) Van Roekel. He lived his youth on a farm southwest of Boyden where he attended rural school. He was united in marriage to Alice Cleveringa of Orange City on May 7, 1941. To this union two daughters were born. They lived and farmed south of Boyden. Alice passed away January 28, 1975. He was united in marriage in August of 1976 to Jeanette Bouwman. They moved into Boyden in July of 1987. Jeanette passed away December of 1987. He was united in marriage to Gert Kiel of Alvord in September 1988 at Doon. They made their home in Boyden until May of 2009 when they moved to Fieldcrest in Sheldon. He entered Sanford Senior Care in January of 2014. Abe passed away on Wednesday, November 9, 2016 reaching the age of 98 years, 10 months and 15 days.
Abe was a lifetime member of First Reformed Church in Boyden. He was chairman of the church mission drive and part of it for many years. He was a loyal supporter of the Senior Saints music group. He enjoyed feeding cattle, spending time at sale barns, buying cattle for area cattle feeders, fall trips to Montana ranches, fishing, playing cards and dominos.
Abe is survived by his wife, Gert of Sheldon; two daughters, Myrna (Marvin) Vant Hul of Hull and Audrey Hoftyzer of Boyden; four grandchildren, Marlys (Merrill) Nettinga of Hull, Marchelle (Mike) Kots of Carroll, Kayla (Kevin) Rosenboom and Craig (Kristin) Hoftyzer both of Boyden; nine great grandchildren; one sister, Joan Van Gorp of Sioux Center; nieces; nephews; five stepdaughters; one step son; numerous step grandchildren and step great-grandchildren.
Abe was preceded in death by wives, Alice and Jeanette; son-in-law, Jerry Hoftyzer, one brother, Albert Van Roekel; four sisters, Nancy Horn, Gert Vander Lee, Mina Harman and Henrietta Ferwerda.
To order memorial trees or send flowers to the family in memory of Abe J. Van Roekel, please visit our flower store.