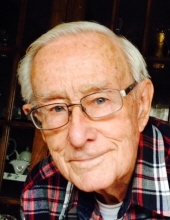 Adrian K. Dorsman, age 98, of Sheldon who passed away on Saturday, November 7, 2020 at Sanford Sheldon Medical Center. His graveside service will be 10:00 A.M. Friday, May 20, 2022 in the Nassau Township Cemetery in Alton, Iowa with Rev. Paul Van Maaren ~ officiating.

With Military Honors provided by the McGlothen-Cowrie Post of the American Legion of Sheldon.

The arrangements are under the care of the Vander Ploeg Funeral Home in Sheldon.
Online condolences may be made to the Family at www.vanderploegfunerals.com


Services for Adrian K. Dorsman, age 98, of Sheldon who passed away on Saturday, November 7, 2020 at Sanford Sheldon Medical Center. His memorial service will be at 1:30 P.M. on Friday, November 13, 2020 at First Reformed Church in Sheldon with Pastor Paul Van Maaren ~ officiating.
Burial will be at a later date at the Nassau Township Cemetery in Alton.
Visitation with family present will be from 5 - 7 P.M. on Thursday, November 12, 2020 at the Vander Ploeg Funeral Home in Sheldon.

Masks are required for both the visitation and the funeral service.

Social distancing will be asked to be followed as well.

MUSIC
“Nearer My God To Thee”
“Amazing Grace”
“What A Friend We Have In Jesus”
“How Great Thou Art”
Organist: Ingetta Tutje

Adrian was born on a farm near Sibley, Iowa on September 26, 1922 to Kryn and Rika (Van Drie) Dorsman. The family moved to Sheldon, Iowa, where his parents operated a hatchery and he attended school, graduating in 1940. During his years in high school he enjoyed band and choir. He continued to sing in church and chapel choirs until very recently.
When World War II started Adrian went to work at Douglas Aircraft at Long Beach, CA building wings for the Boeing B17 bomber. Here he registered for the draft, but he found that if he volunteered, he could select the service branch and specialty, selecting the Army Signal Corp. He was assigned to the radar school at Camp Murphy, FL. Where he studied and taught radar circuits. Adrian was then selected for the Army Specialized Training Program at Washington and Lee University in an engineering program. After a year that program was cancelled, and the entire unit was integrated into the 95th infantry which shortly embarked to action in Europe. He was a member of the 1st Battalion 378 Infantry working as a messenger.
After the war he returned to Sheldon and worked at the family hatchery. At this time, he met and married Alberta Jane (Betty) Harmelink on March 28, 1947. To this union was born, Carol (Jack) Petty of Big Fork, Montana, Ryan (Jeanine) Dorsman of Sheldon, Iowa and Gregory (Melinda) Dorsman of Anaheim Hills, California. The hatchery business was slowing down at this time so he and Betty decided he should take advantage of the Bill of Rights for veterans. He received a BS and MS in Electrical Engineering at Iowa State College, graduating in 1953. Throughout the years in college Betty worked many jobs to keep bread on the table. At this time Betty was honored with the degree PHT, Pushing Hubby Through. Daughter Carol was born on May 22, 1948, son Ryan came along on October 19, 1950, while Gregory was born on Oct. 23, 1953.
Upon graduation Adrian went to work at Rockwell International where he was a research engineer. Here he was privileged to witness the advance of electronics from using vacuum tubes, progressing to transistors and integrated circuits which are now the basis for all the electronic toys we now enjoy. During the 30 years he was with Rockwell he was awarded 25 patents in inertial navigation components. Adrian retired in February 1983 and he and Betty moved to Sheldon where they still live. In September of 2017, he and Betty moved to the Sheldon Christian Retirement Home. Adrian passed away on Saturday, November 7, 2020 at the Sanford Medical Center in Sheldon reaching the age of 98 years, one month and eleven days
For a number of years, they have been privileged to be able to spend winters in Mesa, Arizona and they enjoyed trips to the Holy Land, Europe, Hawaii, Australia, Mexico and other destinations. Adrian’s hobbies included gardening, stained glass and woodworking, especially lathe work crafting many useful items including pen and pencil sets, salt and pepper shakers, light pulls, Etc..
Those left to cherish his memory are his wife Betty of 73 years, his children, Carol, Ryan and Gregory, 10 grandchildren and 15 great grandchildren, one sister, and a sister-in-law, Irene Sample and other relatives and close friends.
He was preceded in death by his parents, sister’s, Gertrude, Grace, Johanna, Eva and Jeanette Bensema and their spouses, brothers-in-law, Loran Sample and Bob, Don and John Harmelink and a number of close friends, especially Bernie Boone.
To order memorial trees or send flowers to the family in memory of Adrian K. Dorsman, please visit our flower store.