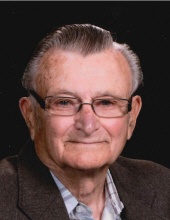 IN LOVING MEMORY OF
ADRIAN KRAAI

MUSIC
“If You Could See Me Now”
Sung by: Marilyn Maurer
CONGREGATIONAL HYMNS
“In The Garden”
“What A Friend We Have In Jesus”
“Holy, Holy, Holy”
Organist: Ingetta Tutje

Military graveside presented by the
McGlothlen-Cowie Post #145 of the American Legion.

Adrian Kraai, the son of Jacob and Maria (Bruyn) Kraai was born on October 24, 1930 at the Kraai family farm in rural Sioux County, Iowa. He attended country school. He helped his father on the family farm until he enlisted in the United States Army in 1952 and was honorably discharged in 1954. Adrian returned to the family farm and on August 18, 1955 he was united in marriage to Winona Vande Garde at First Reformed Church in Sheldon. After their marriage they continued to live on the Kraai family farm where Adrian continued to farm. Adrian passed away on Tuesday, January 16, 2018 at the Sanford USD Medical Center in Sioux Falls, South Dakota reaching the age of 87 years, 2 months and 22 days.
Adrian was a member of First Reformed Church in Sheldon. He was always easy going and was able to make friends easily. He enjoyed cars, tractors and guns.
Left to cherish Adrian’s memory is his wife of 62 years, Winona of rural Sheldon; five children and their spouses, Melinda and Verlyn Fedders of Orange City, Iowa, Sherie and Craig Blom of Alton, Iowa, Twila and Michael Flom of Sioux Falls, South Dakota, Lisa and Chuck Roos of Rock Rapids, Iowa and Jason and Debby Kraai of Hull, Iowa; ten grandchildren, nine great grandchildren; sister, Mary Helene Rozeboom of Sheldon; nieces; nephew’s other relatives and friends.
Adrian was preceded in death by his parents, Jacob and Maria Kraai; sisters, Johanna and Peter Kroese, Hermina and Henry Boerhave and brother in law, Marion Rozeboom.
To order memorial trees or send flowers to the family in memory of Adrian Kraai, please visit our flower store.