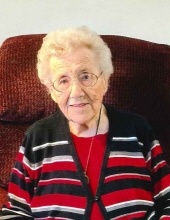 Services for Albertha H. Van Roekel, age 96, of Sheldon who passed away on Wednesday, June 10, 2020 at Sanford Sheldon Senior Care. A private family graveside will be held on Saturday, June 13, 2020 at East Lawn Cemetery in Sheldon.
Arrangements are under the care of the Andringa Funeral Home - Sheldon.

MUSIC
“Great Is Thy Faithfulness”

ALBERTHA VAN ROEKEL
Albertha Van Roekel, the daughter of Ben and Minnie (De Jong) Gesink, was born on November 26, 1923 in Orange City, Iowa. She attended Maurice and Orange City schools through the 8th grade. She worked at her uncle’s grocery store after school and met Albert Van Roekel in Orange City. The couple married on February 8, 1949 in Orange City. They moved to rural Sanborn where they lived and farmed. In 1989, they retired and moved to Sheldon. Albert preceded Albertha in death on March 8, 2004. In November of 2011 she moved to the Christian Retirement Home. In 2018 she moved to Fieldcrest Assisted living for a year and a half before moving to Sanford Senior Care where she passed away on Wednesday, June 10, 2020 reaching the age of 96 years, 6 months and 14 days.
Albertha was a member of the First Christian Reformed Church in Sheldon where she served on ladies’ aide. She volunteered at the Treasure Chest in Sheldon. She enjoyed crocheting and baking and especially loved visiting and spending time with her family.
Those left to cherish her memory are her son, Wayne and wife Marsha Van Roekel of Sheldon, Iowa; daughter-in-law, Deanne and her husband Steve De Jong of Hull, Iowa; six grandchildren, Jenny Altena, Emily Van Roekel, Andy Van Roekel, Matt Van Roekel, Brandon Van Roekel and Chris Van Roekel; 13 great grandchildren and 4 great-great grandchildren; sisters, Ella Mae Vanderwindt and Lois Sneider both of Orange City, Iowa; many nieces and nephews and other relatives and friends.
Albertha was preceded in death by her parents; husband, Albert; son, Allen Van Roekel (8/4/98) brothers, Bert and John Gesink and sister, Henrietta De Jong.
To order memorial trees or send flowers to the family in memory of Albertha H. Van Roekel, please visit our flower store.