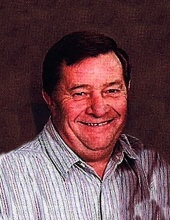 Allen Jay Baartman, age 74, of Britt, Iowa and formerly of the Boyden and Spencer, Iowa area passed away on Saturday, September 17, 2022, at the Westview Care Center in Britt, Iowa. His Celebration of Life will be held on Friday, September 23, 2022 from 9:00 – 11:00 A.M. at the Vander Ploeg Funeral Home in Boyden, Iowa.

A Private Family Graveside Service will be held later in the Sheridan Township Cemetery in Boyden.

The Vander Ploeg Funeral Home in Boyden, Iowa is in charge of arrangements.

Allen Jay Baartman, the son of Edward and Anna (Vande Vegte) Baartman was born January 16, 1948 in Sheldon, Iowa. He spent his youth in the Boyden area where he attended school in Boyden. He was united in marriage to Barbara Norden in December of 1969. Allen had worked for Smit and Son’s and later as a mechanic for Van Wyk Trucking of Sheldon until his retirement in 2013. Allen had moved to Sheldon in 2006 before moving over to Spencer to be near his son, Mike and he moved to the Westview Care Center in Britt, Iowa in 2019. Allen passed away on Saturday, September 17, 2022 at the Westview Care Center in Britt, Iowa, reaching the age of 74 years, 8 months and 1 day.

Allen was a member of the United Methodist Church and was a past member of the First Reformed Church in Boyden, Iowa. He loved watching birds, fishing and being with his family and grandchildren.

He is survived by a son, Michael (Karen) Baartman of Spencer, Iowa and a daughter, Teresa Baartman and her friend, Jon Wilson of Cedar Rapids, Iowa; he is also survived by his brother’s and their wives, Kenneth and Shirley Baartman and Edwin and Kathy Baartman both of Boyden, Iowa; and a brother-in-law, John Steensma of Sanborn, Iowa and other relatives and friends.

He is preceded in death by his parents and a sister, Patricia Steensma.

To order memorial trees or send flowers to the family in memory of Allen Jay Baartman, please visit our flower store.