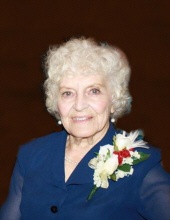 Memorials may be directed to:
The American Reformed Church ~ Primghar
Shriners Children Hospital

Arrangements are under the care of the
Vander Ploeg Funeral Home; Sheldon, Iowa.
ALVINA VAN HEUVELEN
Alvina J. Van Heuvelen, the daughter of Fred and Eva (Van Oort) Wilts was born October 27, 1922 in Matlock, Iowa. She received her education in area country schools. On June 21, 1945, she was united in marriage to Henry John Van Heuvelen in Newkirk, Iowa. The couple began farming near Archer, Iowa and moved to what would be their family farm near Gaza, Iowa in 1953. They farmed for a total of 54 years until retiring in 1999 and remained on the family farm until moving to Sheldon, Iowa in 2007. Henry and Alvina enjoyed their home in Sheldon, remodeling the house and filling the yard with beautiful flowers and trees. During their later years they enjoyed traveling together and spent several winters in Mesa, AZ. Henry preceded her in death on November 7, 2017. Alvina moved to The Village at Legacy Pointe in Waukee, Iowa to be near two of her sons and there she passed away on Wednesday, June 5, 2019 reaching the age of 96 years, 7 months and 9 days.
She was a member of the American Reformed Church in Primghar. She had a love for dolls which sprouted her side business, Country House of Dolls. She enjoyed baking, gardening flowers, singing, especially singing duets with her husband, Henry at many services. Alvina’s family was very important to her.
Left to cherish her many memories are her sons, Ronald (Vicki) Van Heuvelen of Oskaloosa, Iowa; David (Judi) Van Heuvelen of St. Lawrence, South Dakota; Wayne (Priscilla) Van Heuvelen of Urbandale, Iowa; a daughter-in-law, Mary Van Heuvelen (Mike) Wheaton of Sioux Falls, South Dakota; eight grandchildren, Ann (Matt) Drummond, John (Whitney) Van Heuvelen, Dawne (Matt) Olson, David Jr. (Laura) Van Heuvelen, Joy (Bryan) Wedan, Matt (Kaylene) Van Heuvelen, Melissa (Joe) Carrington, and James Van Heuvelen, also eighteen great-grandchildren, one great-great-grandchild, 2 sisters, Joyce Johnson of Sun City, Arizona and Mary Reekers of Hawarden, Iowa and other relatives and friends.
She was preceded in death by her husband, Henry; a son, James Van Heuvelen; her parents, two sisters, Harriet Reimers and Evelyn Postma and a brother Fred Wilts Jr..

Don’t grieve for me, for now I’m free
I’m following the path God laid for me
I took His hand when I heard Him call
I turned my back and left it all.

I could not stay another day
To laugh, to love, to work or play
Tasks left undone must stay that way
I’ve found that peace at the close of day.

Don’t be burdened with times of sorrow,
I wish you the sunshine of tomorrow.
My life’s been full, I’ve savored much,
Good friends, good times, a loved one’s touch.

Perhaps my time seemed all too brief
Don’t lengthen it now with undue grief.
Lift up your heart and share with me
God wanted me now; He set me free.
To order memorial trees or send flowers to the family in memory of Alvina J Van Heuvelen, please visit our flower store.