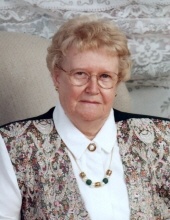 Angeline “Ann” H. Miller
Rural Paullina, Iowa
Services for Angeline “Ann” H. Miller, age 94, of rural Paullina who passed away on Monday, October 5, 2020 at her residence. A private family funeral service will be held on Friday, October 9, 2020 at the United Church of Primghar with Pastor Mike Cooper ~ officiating.
Burial will be at Pleasant Hill Cemetery in Primghar.
There will be no visitation.
Arrangements are under the care of the Eldridge Family Funeral Home in Primghar.

Angeline “Ann” Harriet Miller the daughter of Walter and Nellie (Brunsting) Van Der Vliet was born January 23, 1926 on a farm in Lyon County, Iowa. She moved with her family to the Sanborn, Iowa area where she received her education in country school. On June 30, 1946 she was united in marriage to Kenneth E. Miller in Sanborn, Iowa. After their marriage, the couple farmed for many years in the Primghar, and Paullina area. Her husband preceded her in death on September 13, 1989 in Primghar. Ann remained on the family farm until passing away at her home in rural Paullina on Monday October 5, 2020 reaching the age of 94 years eight months and twelve days.
She was a member of the United Church of Primghar. She enjoyed family times, quilting, baking her homemade cookies and was known for her cooking.
Ann is survived by her children Ruth Deignan of Sioux City, Iowa; Cheryl (Kurt) Meyer of Holstein, Iowa; Kenneth (Elizabeth) Miller of Primghar, Iowa; Wanda (Tim) Pauling of Paullina, Iowa and Ross (Kathy) Miller of Primghar, Iowa also sixteen grandchildren; twenty six great grandchildren and two great great grandchildren; one sister Mary Griemann in Arizona and three brothers-in-law Les Miller in Texas, Merlynn Miller of Sheldon, Iowa and Larry Menke of Sioux City, Iowa also many other relatives and friends.
She was preceded in death by her husband a great grandson Emery Van Beek, parents, and three sisters.
To order memorial trees or send flowers to the family in memory of Angeline "Ann" H. Miller, please visit our flower store.