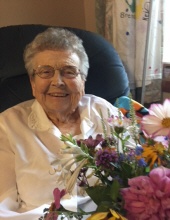 Visitation with family present
will be from 5 – 7 P.M. on Saturday, November 3, 2018
at the Eldridge Family Funeral Home in Primghar.


SPECIAL MUSIC
“He Leadeth Me! O Blessed Thought”
“Leaning On The Everlasting Arms”
“When The Roll Is Caller Up Yonder”
Led By: Brad Dighton


After today’s service, relatives and friends are invited
to join the family in the fellowship hall of the church.

Arrangements are under the care of the
Eldridge Family Funeral Home; Primghar, Iowa.
ANN E. STROEBELE
Ann Edith Angus Stroebele of Primghar, formerly of Oakland, Iowa, passed away peacefully on October 30, 2018, at the age of 93 at the Pearl Valley Care Center in Primghar.
Ann was born July 12, 1925 on the family farm near Malvern, Iowa, the 5th child of Walter & Bertha (Bruns) Angus. Ann attended Strahan Consolidated School 1st-12th grades. At 16 years of age Ann attended Simpson College in Indianola, Iowa, for two years, earning her teaching degree.
Ann taught second graders in Knoxville, IA for one year, before coming to teach with her college friend, Margaret White, in Oakland. She taught for two years before moving to Omaha to work as a secretary at the Union Pacific Railroad. She met Everett on a blind date just two weeks before she moved. They were married October 2, 1949 at the St. Paul's Lutheran Church of Council Bluffs. They lived on the Stroebele family farm and had three daughters, Sheryl, Teresa and Janae. Ann later went back to school to get her bachelor’s degree and returned to teach a total of twenty-seven years in 5th, 4th and 3rd grades until she and Everett retired. After retiring they started traveling around the US and Canada visiting all 50 states and enjoyed a trip to Europe. They settled in Mesa, AZ for seventeen winters in a RV park, where they enjoyed playing cards and games with their friends. Ann was creative and fun-loving with costumes and poetry. She and Everett enjoyed dancing as a couple throughout the years. Ann loved to cook and bake, trying new recipes and sharing her goodies with friends, neighbors and church. Ann would prefer to feed company at home rather then going out to eat. She also loved to read books and spending time with her family.
Ann's memory is cherished by her daughters, Sheryl Wilson (Doyle) of Primghar, Teresa Dighton (Brad) of Rapid City, SD and Janae Henningsen (Birger) of Clinton, IA. Grandma will be missed by eight grandchildren, Shana Wilson (Mark Babas), Justin (Rachel) Wilson, Molly (Derek) Fivelson, Alex (Jenny) Dighton, Andrew (Chelsea) Dighton, Keinah (Matthew) Tindol, Brenon Henningsen, Evanny Henningsen. GGMa will be missed by eleven and one more on the way great-grandchildren and many nieces and nephews.
Preceding her in death was her husband, Everett, of 63 years. She was the last aunt on both sides of the family. She was also preceded by her parents, three brothers and one sister and their spouses, two brothers-in-law, eight sisters-in-law and their spouses.
To order memorial trees or send flowers to the family in memory of Ann E. Stroebele, please visit our flower store.