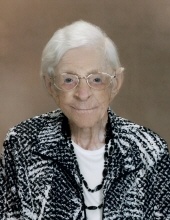 IN LOVING MEMORY OF
ANNA RENSINK

MUSIC
“Amazing Grace”
Sung by: Pastor Paul Van Maaren
CONGREGATIONAL HYMNS
“How Great Thou Art”
“Great Is Thy Faithfulness”
“God Be With You”
Organist: Ingetta Tutje

Arrangements are under the care of the
Vander Ploeg Funeral Home; Sheldon, Iowa.
ANNA RENSINK
Anna Rensink was born on the family farm by Newkirk, Iowa on August 25, 1912 to Henry P. and Anna (Scholten) Langstraat. She attended school in Newkirk. On December 28, 1933, she married Bernard Rensink on the family farm. They resided on farms by Orange City and Hospers before moving to Sheldon. Bernie passed away after a brief illness in 1964. She started working at the Sheldon Community Memorial Hospital in the laundry and worked there until she retired at the age of 70. Anna never drove so she walked to work and back every day. You often would see Anna walking uptown or here and there until she was 105. She entered Sanford Senior Care in February of 2019 and passed away there at the age of 106 on Sunday, April 28, 2019.
Anna was a member of First Reformed Church in Sheldon. She loved to work outside. A big highlight in her life was being chosen as the Grand Marshal in the Sheldon Celebration Days Parade on Labor Day in 2016 at the age of 104.
Left to mourn her passing are her daughter, Iola Whitsell; eleven grandchildren, Lisa (Joel) Blankers, Barry (Maggie) Whitsell, Brad (Sara) Whitsell, Linda (Brad) Van Regenmorter, Donna (Forrest) Childre, Debra (Scott) Radloff, David (Marlene) Rensink, Danny Joe Rensink, Darin Rensink, Denis (Julie) Rensink and Charles (Kendra) Rensink; fourteen great grandchildren; ten great-great grandchildren; many nieces and nephews.
Preceding her in death were her parents, Henry and Anna Langstraat; husband, Bernard Rensink; son, Kenneth L in 1999; son-in-law, William T. (Tom) Whitsell; grand daughter-in-law, Joan M Whitsell; step mother, Allie; siblings, Herman (Grace & Winifred) Langstraat, Peter (Tracie) Langstraat, Johanna (Lawrence) Den Hartog, Nellie Langstraat, Lester (Ted) (Alice) Langstraat and Harriet (Elmer) Zordrager


Resting in Her Heavenly Home

Two tired eyes are sleeping
Two tired hands are still
The one we loved so deeply
Is resting at God’s will.

May she always walk in sunshine
God’s love around her glow
For all the happiness she gave us
No one will ever know.

It broke our hearts to lose her
But she did not go alone
For a part of us went with her
The day God called her home.
To order memorial trees or send flowers to the family in memory of Anna Rensink, please visit our flower store.