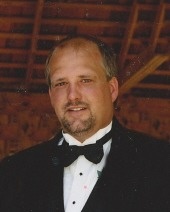 Arlyn D. Holtrop, age 55, of Sheldon, Iowa who passed away on Sunday, October 31, 2021, at the Avera McKennan Heart Hospital in Sioux Falls, South Dakota. His services will be held at 11:00 A.M. on Saturday, November 6, 2021, at St. Paul Lutheran Church in Sheldon with Rev. Daniel Baker ~ officiating.

Burial will be in the East Lawn Cemetery in Sheldon on Saturday, November 6, 2021 with a 10:15 A.M. graveside service

CONGREGATIONAL HYMNS
“On Eagle’s Wings”
“I Can Only Imagine”
Pianist: Arlyce Oosterhuis

Arlyn Dean Holtrop, the son of Alvin and Georgiann (Brinks) Holtrop was born November 21, 1965 in Sheldon, Iowa. He grew-up on a farm near Boyden, Iowa and received his education at Sheldon Christian School and later graduated from Western Christian High School in Hull, Iowa in 1985. After high school he farmed with his father and started working for the Co-op. He also drove truck for several different businesses through-out his career. He was united in marriage to Michelle Eichmann at the St. Paul Lutheran Church on September 11th, 1999 in Sheldon, Iowa. The couple made their home in Sheldon. Arlyn passed away on Sunday, October 31, 2021 at the Avera McKennan Heart Hospital in Sioux Falls, South Dakota, reaching the age of 55 years, 11 months and 10 days.
He was baptized and later made his profession of faith as a youth at the First Christian Reformed Church in Sheldon, Iowa. He was currently a member of the St. Paul Lutheran Church in Sheldon, Iowa. He enjoyed going out to the farm and spending time in the outdoors. Family was very important to Arlyn and he enjoyed spending time with them.
Arlyn leaves to cherish his memory, his wife, Michelle of Sheldon, their children, Aaron Holtrop of Colorado Springs, Colorado and Kayla Holtrop of Sheldon; his mother, Georgiann Holtrop of Sheldon; a sister, Rhonda Loges of Ireton, Iowa; a brother, Rick and his wife, Carmen Holtrop of Sheldon, Iowa; a sister-in-law, Michelle and her husband, (John) Sachen of Sheldon; his father and mother-in-law, Harold and Jolene Eichmann of Sheldon, Iowa; a brother and sister-in-law, Mike and Lori Zeimen of Cherokee, Iowa and other relatives and many friends.
He was preceded in death by his father, Alvin and a brother, Brian.
To order memorial trees or send flowers to the family in memory of Arlyn Dean Holtrop, please visit our flower store.