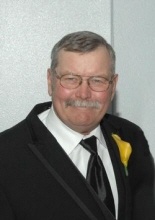 Visitation will be after 4 P.M. on Thursday, March 16, 2017
with family present from 5 7 P.M.
at the Vander Ploeg Funeral Home in Boyden

CONGREGATIONAL HYMNS
How Great Thou Art
In The Garden
Just a Closer Walk With Thee
Precious Lord, Take My Hand"

ARTHUR P. DIEKEVERS
Arthur Paul Diekevers, the son of Adrian (Rusty) and Nelvina (Reimers) Diekevers was born June 1, 1944 in Sioux City, Iowa. He received his education in country school Capel # 2 through the eighth grade. He then attended Boyden High School graduating in 1963. He served in the Army and was honorably discharged in 1964. On March 3, 1967, he was united in marriage to Phyllis Roos at her parents home near Hospers, Iowa. Art and Phyllis just celebrated their 50th wedding anniversary. The couple moved to a farm south of Boyden, Iowa where they farmed for many years until his retirement in 2015. The couple remained on the farm which was a big part of Arts life even in ill health. Art watched his sons plant and harvest the crops. He passed away at his farm home on Monday, March 13, 2017 reaching the age of 72 years, 9 months and 12 days.
He was baptized, confirmed and was a lifelong member of the United Presbyterian Church in Boyden. He was also a member of the Sheldon Eagles. Most important was Arts family, his wife, sons and grandchildren.
Arthur is survived by his wife of 50 years, Phyllis, of rural Boyden, Iowa; his two sons, Greg (Dori) Diekevers of Boyden, Iowa and Gary (Angie) Diekevers of Boyden, Iowa; four grandchildren, Mitchell, Alex, Whitley and Tanner; one sister, Anita (James) Kray of Boyden, Iowa; also other relatives and many friends.
He was preceded in death by a granddaughter, Lauren Faith Diekevers and his parents.

The Lord is my Shepherd; I shall

not want. He maketh me to lie

down in green pastures; He leadeth

me beside still waters. He

restoreth my soul; He leadeth me

in the paths of righteousness for

Yea, though I walk through the

valley of the shadow of death, I will

fear no evil; for Thou art with me;

Thy rod and Thy staff they comfort

me; Thou preparest a table before

me in the presence of mine enemies;

Thou anointest my head with oil,

my cup runneth over.

Surely goodness and mercy shall

and I will dwell in the house of the

Lord forever.
To order memorial trees or send flowers to the family in memory of Art Diekevers, please visit our flower store.