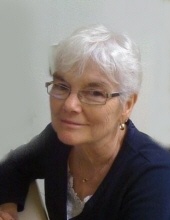 Services for Barbara Ann Goodwin, age 84, of Minneapolis formerly of Lawton, Iowa who passed away on Friday, May 29, 2020.
Her graveside service will be 10:00 A.M. on Saturday June 13, 2020 at Prairie View Cemetery in Paullina with Pastor John Erickson ~ officiating.

Barbara Ann Goodwin was born on August 23, 1935 in Peterson, Iowa to Walter and Nina (Gillespie) Genson. She was raised in Spencer, Iowa and graduated from Spencer High School in 1954. She married John “Jack” Goodwin on January 28, 1961 in Sioux Falls, South Dakota. They traveled with Jack’s work as an Ironworker with their three children Angela, Timmy, and Tommy until 1965 when they settled in Lawton, Iowa. In 1971 they bought the old Presbyterian Church in Lawton that Barb designed to make their home. She attended Morningside College and graduated from Barber School in Sioux City, Iowa. Barb opened and operated her own business out of her home known as Barb’s Barber Shop in Lawton until her retirement. In 2014 Barb and Jack moved to Minneapolis, Minnesota to be close to their son Tommy. On May 29, 2020, Barb passed away at the University Of Minnesota Hospital in Minneapolis, Minnesota after a sudden decline in her health at the age of 84.
Throughout her life she enjoyed painting, sewing, knitting, and baking. Barb’s beautiful paintings were eventually on display at the Spencer Fair. She enjoyed giving her family and friends handmade gifts, whether it be several dozen cookies, afghans, scarfs, hats, or a picture she painted. Barb loved spending time with her grandkids. All 5 grandkids spent time in Lawton in the summers together when they were young and have many childhood memories of walking the track with Grandma Barb at the high school and sneaking to BJ’s with Grandpa Jack. Barb enjoyed cutting and styling her granddaughters’ hair at her Barber shop and spoiling the girls by taking them shopping.
Eventually Barb and Jack became snowbirds and did a lot of traveling to many places and settled in Yuma, Arizona for their winters. They were snowbirds for 26 years and made many friends in all their travels. During this time in Yuma, Barb and Jack took up square dancing and even danced at the Iowa State Fair. They made a lot of memories going to the casino together on their adventures in the South. After moving to Minneapolis Barb became very involved in animal rescue with Tommy and discovered her true love for animals. She had two cats that she absolutely adored: Ninnie and Ringo. Barb loved her family fiercely and found her greatest joy in spending time with her children, grandchildren, and great-grandchildren.
Barb is survived by her husband Jack of 59 years, daughter Angie Neighbors of Greenwood, Missouri; son Tommy Allen Goodwin of Minneapolis, Minnesota; grandchildren Holly (Bill) Klink of Primghar, Iowa; Travis Myers of Greenwood, Missouri; Levi Hoger of Beecher, Illinois; and Hope (Brian) McDonald of Lake Crystal, Minnesota; great - grandchildren; Jarome, Jaylah, Karl, Chase, Cate, Landan, Chandler, Ronin, and Reina. Brother Bill (Ladonna) Genson of Lone Oak, Texas and a brother- in- law Michael (Sharon) Goodwin of Gold Canyon, Arizona; and many other relatives and friends.
Barb was preceded in death by her parents, her brother Walter “Jack” Genson, her son Tim Goodwin in 1985, and her grandson Tyler Myers in 2018.
To order memorial trees or send flowers to the family in memory of Barbara Ann Goodwin, please visit our flower store.