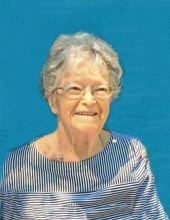 CONGREGATIONAL HYMNS
In The Garden
How Great Thou Art
Organist: LaNan Eldridge

FINAL RESTING PLACE
Pleasant Hill Cemetery
Primghar, Iowa
After todays service relatives and friends are invited to join
the family in the fellowship hall of the church.

Barbara E. (Hook) Craun, the daughter of Theodore S. and Lenora (Parry) Hook was born May 29, 1923 in Whiting, Iowa. She graduated from Wayne High School in Wayne, Nebraska and from Wayne State Teachers College in Wayne, Nebraska. She attended the University of Iowa to receive her Masters in Mathematics. She moved to Primghar where she was principal, taught math and was senior class sponsor. On June 21, 1948, she was united in marriage to Robert Dale Craun at the Presbyterian Church in Wayne, Nebraska. After their marriage, Barb worked at the OBrien Courthouse for the Sheriffs Department and later the OBrien County Recorders Office. After a few years at the courthouse she began working at the Primghar Savings Bank where she worked for many years until her retirement. Her husband preceded her in death on October 16, 2006 and Barb remained in the family home for several years until moving to Guthrie Center, Iowa to be near her daughter Mary Ann. She passed away in Guthrie Center on Saturday January 21, 2017 reaching the age of 93 years, 7 months and 21 days.

She was an active member of the United Church in Primghar and sang in the choir for many years. Barb and Florence Schoening sang for many funerals in the Primghar community. She remained active in the school in Primghar by being a chaperon for school events and attending school games. She was a former girl scout leader, member of P.E.O., Primghar Womens Club, Primghar Playhouse Board, Order of the Eastern Star and was treasurer of the Primghar Library Board. She enjoyed reading, playing bridge, music and cribbage.