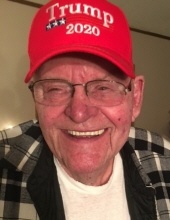 Ben N. Rohwer, age 87, of Sanborn, Iowa who passed away on Saturday, January 16, 2021 at the Sanford Medical Center in Sioux Falls, South Dakota. His services will be at 11:00 A.M. on Thursday, January 21,2021 at the First Presbyterian Church in Sanborn, Iowa with Pastor Gregg Johnson ~ officiating.

Private Family Burial will be in the East Lawn Cemetery in Sheldon, Iowa.

Visitation with the family present will be from 5:00 -7:00pm on Wednesday, January 20, 2021 at the Vander Ploeg Funeral Home in Sheldon, Iowa.

Masks and Social Distancing are required

CONGREGATIONAL HYMN
“Amazing Grace”
MUSIC
C.D. “I Have Just Seen Jesus”
by Sandy Patty & Larnelle Harris
C.D. “Wind Beneath My Wings” by Bette Midler
C.D. “Knowing What I Know About Heaven”
by Guy Penrod
C. D. “You Raise Me Up” by Josh Groban
Organist: LaNan Eldridge

Arrangements under the care of the
Vander Ploeg Funeral Home; Sheldon, Iowa
Bernard Nathan Rohwer, the son of Arthur B. and Ruth (Hughes) Rohwer was born December 17, 1933 on a farm near Paullina, Iowa. He graduated from Archer High School in 1952. He entered the United States Air Force in February of 1953 and served until he was Honorably Discharged in February of 1957. He returned to the Archer area and worked at the feed mill of the Archer Co-op Elevator and worked his way up to be the General Manager of the elevator. He was united in marriage to Dorothy Straub and to this union three children were born. He retired from the elevator in 1986. On May 6, 1988 he was united in marriage to Leah Vander Ploeg in Spirit Lake, Iowa. After their marriage, Ben went to work as an interim manager for Cenex/Land O’Lakes. That position took him to thirteen different Co-ops! He always said he couldn’t keep a job! The first ten years of their marriage, they moved seven times! But with those moves they met and made some wonderful friends. While managing at Big Stone Co-op they bought their dream home on Big Stone Lake. They never had a boat but caught all the walleye and perch they wanted right off their dock! From there, he would leave on Mondays for Nebraska and get home on Fridays. His last job took him to Dupree, SD on the Cheyenne River Sioux Reservation – it wasn’t the end of the world, but you could see it from there! It was there that he woke up blind in his left eye from wet macular degeneration. Drs. told him he would live the rest of this life with his right eye. Three months later that eye blew! He tried to stay working because they told him, “we don’t want your eyes, we want your brains!” After a year he finally said he couldn’t do it anymore. So, in 2001 they sold their lake home and moved back “home.”
He was told he was “legally blind” but he often wondered, what illegally blind was! Ben and Leah loved to golf together in 2-Ball tournaments, so she suggested they get back into them by promising that if they ever came in last, they would quit! It never happened until he just couldn’t do it anymore! Ben handled his misfortunes with grace and humor! Leah often told people that they made a good couple! Ben couldn’t see where he was going, and Leah couldn’t remember where she had been!! He was so proud to reach 87. His quality of life was not any good! He could hardly see, hear, breathe or walk anymore. And just last week he told Leah he had a good life and great family, and he was ready to go. Every nite Leah would read the daily devotion to him and then they would hold hands and say the Lord’s Prayer. That was the last thing he requested by hand signal and then folded his hands asking to pray! There was no better man than he! One of his employees remarked “Ben was tough, but he was fair!” Ben and Leah relied on their humor to get them thru some dark days! But most of all they relied on their Lord and Savior, Jesus Christ! All praise goes to him! When we asked if he was ready to see his brothers and sisters in Heaven, he gave a resounding “yes”! So we are at peace knowing he’s safe in the arms of Jesus! Ben loved everyone! I don’t remember him ever saying anything bad about anyone! He accepted them just the way they were! And he loved his wife, Leah, so dearly! They enjoyed almost 35 years together, two years dating, 33 married. His children, grandchildren and greats were the light of his life! And they knew they were loved by him. He passed away on Saturday January 16, 2021 at the Sanford Medical Center in Sioux Falls, South Dakota reaching the age of 87 years and 29 days.
He was a member of the First Presbyterian Church in Sanborn, Sanborn American Legion Post#0318, the V.F.W. Post #7373 of Sibley and the Eagles Club of Sheldon. He enjoyed fishing and golfing, spending time with his family and going on road trips with his wife.
Ben is survived by his wife Leah Rohwer of Sanborn, IA, son Steve (Patty) Rohwer of Sheldon, IA; son Jim (Lisa) Rohwer of Prior Lake, MN; daughter Lori “Fritz” (Linn) Rohwer of Boyden, IA; bonus children Dr. Michael (Lisa) Ackerman of Rochester, MN; Jill (Tom) Mouw of Sheldon, IA and Franco Moen of Garner, IA; 18 grandchildren Michael, Stephanie, Bobbi, Haley, Nathan, Kelsey, Paul, Bri, Jaeger, Nicholas, Jens, Grace, Mikayla, Dylan, Mark, Teresa, Brian, and Jade; 21 great grandchildren; 3 great-great-grandchildren, sister-in-law, Jody Vander Ploeg of Okoboji, IA; also other relatives and many friends.
He was preceded in death by his parents, four brothers George, Jim, Alvin, Merrill and spouses, two sisters Mae Rohwer and Jeanne Negus and her husband and a brother-in-law, Phil Vander Ploeg and many nieces and nephews.
He will be greatly missed by a lot of people! I love you, Ben Rohwer.
To order memorial trees or send flowers to the family in memory of Ben N. Rohwer, please visit our flower store.